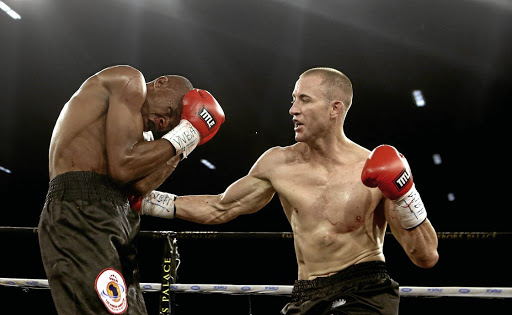 Pressure continues to mount against under-pressure professional boxer John "Section 29" Bopape who faces the prospects of having to justify his continuation with the beloved yet grossly dangerous sport of boxing which is associated with punch drunkenness.

That is a condition seen in boxers and alcoholics. Medical experts say it is caused by repeated cerebral concussions and characterised by weakness in the lower limbs, unsteadiness of gait, slowness of muscular movements, hand tremors, hesitancy of speech and mental dullness.

Bopape has in the past shown great potential but his inconsistency has turned him into a stepping stone for other boxers.

One moment he looks brilliant and the next he is terrible.

To illustrate the above, Bopape who has been around since 2016, was stopped in the 11th round by two-fight newcomer Boyd Allen when they fought for the WBA Pan African junior middleweight belt in March.

After that loss Bopape, from Alexandra, pummelled fancied Ricky Tshabalala into submission in two rounds in June but again Bopape was later stopped in one round by another rookie, Simon Dladla. That was Bopape's fourth stoppage in seven losses against the same number of wins.

Young fighters raise hands to be counted.
Sport
2 years ago

Bopape is rated No.5 nationally and the soft-spoken gentleman - whose career is guided by Bushy Mabele and Jersey Joe Gym in Alexandra - will take on Wade Groth in the main bout of Real Steel's tournament at Turffontein Racecourse on Saturday afternoon.

Groth is the former SA middleweight champion who is on a comeback trail after losing the domestic title in his first defence to Walter Dlamini in December.

After being stopped in one round by Dlamini, Groth suffered a fourth-round stoppage to Nkululeko Mhlongo, who has just ended Dlamini's reign with a fourth technical knockout last month.

Groth came back to pummel Fernando Rodriquez into submission in six rounds on September 28. That was Groth's sixth knockout in eight wins against two losses. The tough former mixed martial arts fighter is rated just above Bopape at No 4. Boxing authorities must monitor Bopape very carefully.

The main supporting bout pits top-rated Chris "The Wolf" Thompson against Malawian Lambani Lano in an international cruiserweight six rounder. Thompson is rated No 2 for the national title that is held by Thabiso Mchunu.

Just when John "Section 29" Bopape was dismissed as a "no hoper" after suffering a stoppage loss to two-fight novice Boyd Allen, he sprung a ...
Sport
2 years ago

I love boxing too much to quit: Muller