I love boxing too much to quit: Muller 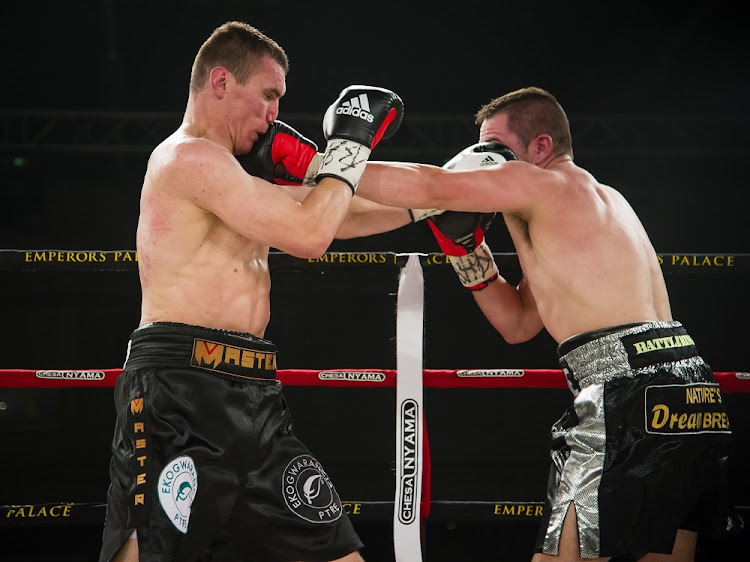 FILE IMAGE: Mateusz "Master" Masternak from Poland (left) and Johnny "The Hurricane" Muller from Rodepoort exchange blows during their 10 rounder which was won by Muller via a majority points decision at Emperors Palace on Saturday night.
Image: n-squared

Johnny "The Hurricane" Muller has vehemently denied having called time on his boxing career.

He explained yesterday that he took a year's break to pay attention to his other businesses, which include a construction company in Roodepoort, west of Johannesburg, where he is based.

Muller - who last fought in 2017 when he lost to Thabiso Mchunu for the SA and ABU cruiserweight belts - makes a comeback on Saturday against Kizito Ruhamnye, the Cape Town-based Congolese.

Their eight-rounder in the heavyweight division will headline Punch Club Promotions' maiden tourney at John Barabble Hall in Benoni.

"I had to take some time off boxing and pay attention to my businesses. I have now sorted out all that needed my attention and that is why I am back. I love boxing too much to just call it quits," said the ex-SA light-heavyweight champion.

Muller, who has fought big names such as Kevin Lerena, Oleksandr Usyk and Mchunu, said he hoped Ruhamnye trained hard because bones could crack in their rematch.

Ruhamnye has not won a fight since their first meeting.

Ayanda Nkosi has vowed to avenge the three losses that his trainer Patrick Malinga suffered to Thompson Mokwana in their four epic battles during ...
Sport
2 years ago

Explosive Ricky "Suga" Tshabalala will be in action against John "Section 29" Bopape over six rounds. Pressure is on Tshabalala to win, because he will kiss goodbye his chances of challenging current SA middleweight holder Walter "Black Mamba" Dlamini should he lose. Tshabalala, who is trained by Damien Durandt, is ranked fifth.

There will be six more undercard bouts and tickets range in price between R150 and R300. Action will begin at 3pm.

Gift "Sheriff" Bholo succumbed to Timo Schwarzkopft's power over seven rounds of their rematch in Germany. Bholo won the first bout on points in South Africa in March.