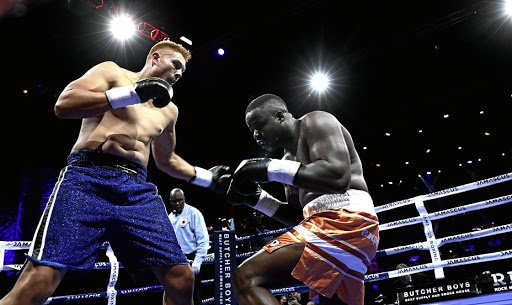 Ruann "Giant King" Visser has pledged his undying love for SA by announcing yesterday that he wants to own the national heavyweight championship belt.

"I am proud to be my country's champion and I will do everything in my power to make sure I become the rightful owner of the championship title," said Visser who did not even break a sweat in registering the first defence against Justice "Venda Viper" Siliga in front of a big crowd at Sun Arena, Time Square in Pretoria.

A two-punch combination to the head in the first round ended what was an eagerly awaited clash.

Siliga had been dying to get the crack at the title that eluded him against ex-champion Osborne Machimana in 2017. Referee Tony Nyangiwe reached the count of 10 with Siliga lying on his back.

"Look, it is so nice when you go and fight outside SA and you are announced as your country's champion. It is a great feeling that makes people take you seriously. This belt has been proudly held by some of the great fighters that ever lived. I treasure it."

"I trained very hard and Steve was on my case. There was no way that I was going to lose this fight - not after making so much sacrifices," said Visser whose record improved to 15 knockouts in 16 wins against two losses.

Kalakoda paid tribute to Machimana, who assisted him in making sure that Visser was in tip-top condition.

Siliga suffered his fourth stoppage - his seventh defeat against eight wins with six knockouts. The boxer, who is trained by Alan Toweel Junior, gave credit to Visser.

"I could not have been in a more better shape that this time. I was fully prepared for war; I did not think even once that it could go this way; he caught me with good shots and congratulations to Ruann," he said gracefully.