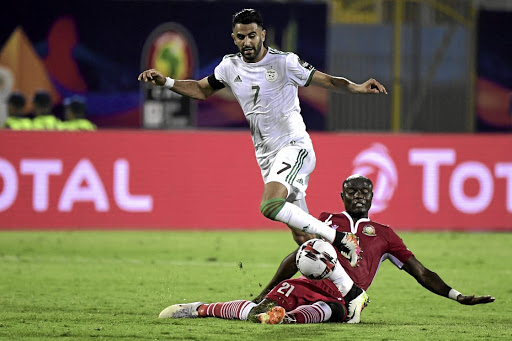 Cairo - Algeria coach Djamel Belmadi has said there needs to be less focus on captain Riyad Mahrez if his team are to be successful at this year's Africa Cup of Nations.

The comment came in the wake of their 2-0 win over Kenya in Cairo on Sunday in their opening game at the tournament in Egypt, where Mahrez scored the second goal, and inevitable questions from reporters afterwards about his potential talismanic role for the team.

"I do not like highlighting players. We need to put a little less focus on Mahrez if we want to make this a big tournament for us," Belmadi responded.

Mahrez, 28, is competing at a third Cup of Nations for his country, who were quarterfinalists in 2015 but flopped in the first round two years ago despite being one of the pre-tournament favourites.

That made Sunday's comfortable win over Kenya pleasing for Belmadi.

"It means a lot to win the first match in any competition," Belmadi said. "We used to start poorly, it was always difficult for us to start well at the Africa Cup.

"In our history, most of the time, we often lost the first match, so this is also a message to the players that we can go far."

Algeria share the Group C lead with Senegal, who they meet next in Cairo on Thursday.

Who are the top Bafana names seeking to make their Afcon debuts in Egypt?

Bafana Bafana’s sporadic qualification for the Africa Cup of Nations (Afcon) in recent editions means they head into this year’s tournament with only ...
Sport
2 years ago

"We expect a tough match against Senegal, the tournament favourite. It's a challenge we have to take on," the coach said.

Meanwhile, giant Senegalese defender Salif Sane will miss at least his team's next two matches after hurting his ankle in the 2-0 victory over Tanzania.

The 1.96m tall centre-back injured his left ankle during Sunday's Group C opener in Cairo and will miss "between 10 and 15 days" with a sprained ligament.

Senegal will however be boosted by the return of star forward Sadio Mane, who was suspended for the opener after picking up a one-match ban during qualifying.