Guns put away as fight is called off 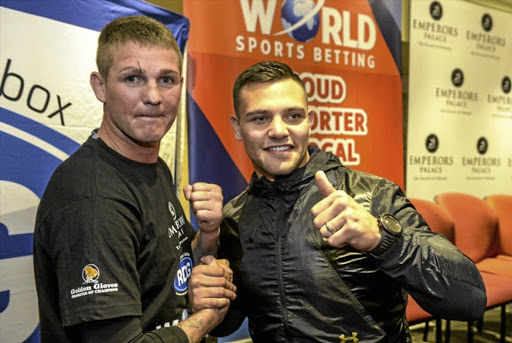 The Kevin 'Two Guns' Lerena vs Thomas 'Tommy Gun' Oosthuizen, which had promised to be a money spinner, has been cancelled. /Sydney Seshibedi

Lerena had promised in December that he was first going to deal with Kazakhstan-born German-based foe, Artur "Thunderman" Mann, at Emperors Palace on Saturday night and then later give Oosthuizen the chance.

"From my side you got the fight," he said in December. "I made a promise that I'll give him that money shot that he needs in June 2019. I will fight this fool in June. It will be the highest-earning fight between two South Africans for the IBO world title."

But Lerena told Sowetan yesterday during Golden Gloves conference at Emperors Palace where he met Artur for the first time that there are more bigger things in store for him such as the unification bout either in June of later in the year.

Lerena thinks of Mann when he wakes up each morning

IBO cruiserweight champion Kevin Lerena wakes up every morning thinking of Artur Mann‚ his opponent on Saturday night‚ but on Tuesday he still found ...
Sport
3 years ago

"Look, I can beat him [Oosthuizen] everyday of the week but right now I'm in the pinnacle of my career, so there is no reason to going backwards. I have Artur in my mind for now," said the left-handed champion, who will bid for the third defence of his belt in Golden Gloves "No Mercy" tournament.

The 25-year-old former SA, WBC Youth and WBA Pan African champion is rated No 11 by both the WBA and the IBF, and eighth by The Ring Magazine.

Lerena described the 28-year-old Mann, who is rated No 10 by the IBF, as credible opponent.

"He is undefeated in 15 fights, so I can't afford to overlook him. I must take care of business on Saturday and then begin at looking at what lies ahead of me, but Oosthuizen is definitely out of the picture."

Speaking through an interpreter, Mann, a Global Boxing Union Intercontinental and WBO International holder, said: "I would not be here if I did not believe that I will beat Kevin. It does not matter how, the important thing is the positive result."

Thembelani Nxoshe, who won it with a seventh-round knockout of Mfundo Gwayana, has been found guilty of misconduct.
Sport
3 years ago

There will be four more bouts and action will begin at 7pm.