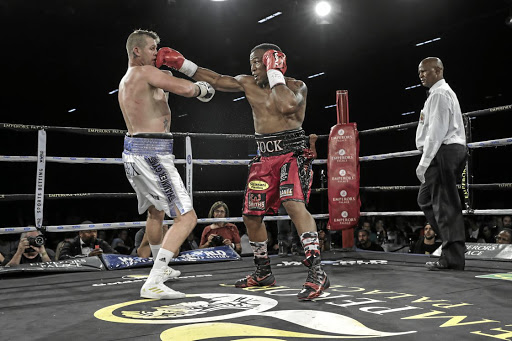 Thabiso "The Rock" Mchunu finally dropped that annoying championship prefix of "former" to his name on Saturday night when he regained the ABU cruiserweight belt from Thomas "Tommy Gun" Oosthuizen at Emperors Palace, Kempton Park, east of Johannesburg.

Mchunu - who also took home the vacant SA title - also avenged the loony points decision he suffered to Oosthuizen at the same venue in September.

There were no knockdowns in their first fight, as was also in their second meeting on Saturday. But Mchunu rocked his foe several times but fell short of putting him down.

The shorter Mchunu fought a clever fight. He stayed close to his taller opponent, making it impossible for Oosthuizen to let go of his longer arms. Oosthuizen spent too much time trying to untie himself.

The big crowd that attended the Golden Gloves box-and-dine tournament, cheered when Mchunu was declared the winner.

"I won the first fight; the judges gave it to him. I made a promise I will beat him emphatically this time, and I did that. I am too smart to be beaten by Oosthuizen," said Mchunu, becoming the first local boxer to defeat Oosthuizen.

In the main supporting bout, Mchunu's stable mate, Thulani "Evolution" Mbenge, laboured for nine rounds against a journeyman, Miguel Vasquez, who had nothing to offer until he retired to his stool going on the 10th round.

It was an uninspiring win for the reigning IBO welterweight champion who remains undefeated after 15 fights. Mbenge had everything in his favour - age, height, reach and mobility but could not capitalise on these attributes.

His eagerness to knock Vasquez made him look ordinary. The only good thing Vasquez can be credited for is making Mbenge miss. Vasquez suffered his seventh loss against 40 wins. "It is what it is, what matters is that I won the fight," said Mbenge.

Walter "Black Mamba" Dlamini ended the short reign of Wade Groth as the South African middleweight champion with a destructive first- round knockout.

"I told you on Tuesday I am gonna beat him up badly," said the 39-year-old champion.