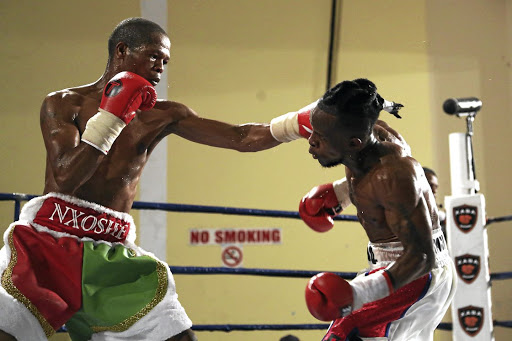 Thembelani Nxoshe and Nhlanhla Ngamntwini. Nxoshe has failed to appeal his doping sanction and his title is now vacant.
Image: MARK ANDREWS

This is because Thembelani Nxoshe, who won it with a seventh-round knockout of Mfundo Gwayana at Orient Theatre on September 30, has been found guilty of misconduct.

Nxoshe failed a doping test after his loss to Ulises Lara from Mexico for the WBC International title at Indoor Sports Centre in Mdantsane on October 12 last year.

The South African Institute for Drug-Free Sport told Sowetan that the boxer from Mdantsane "tested positive beyond the threshold limit for marijuana".

"He received a six-month suspension. He has not appealed the sanction, the window to lodge an appeal, if he disagrees with the sanction, lapses on March 8 [last week Friday]," institute CEO Khalid Galant confirmed.

Marijuana is listed in the banned list in category S8 of the South African Institute for Drug-Free Sport's cannabinoids.

Nxoshe's suspension was effective from February 14 and ends on August 13. Regulations are clear that if a champion is convicted of misconduct, the title is declared vacant.

The 26-year-old supremely built Lerena, a big draw card at Emperors Palace in Kempton Park, will put his belt on the line against Artur "Thunder Man" Mann from Germany in the main contest of Golden Gloves "No Mercy" bill on Saturday night.

Laine, originally from Haiti, has handled many world title fights including the WBA mini flyweight championship between Knockout Freshman from the Philippines and Byron Rojas from Nicaragua last year. Rojas won that belt from Hekkie Budler in Berman's tournament at Emperors Palace in 2016.

Levine said Eddie Pappoe from Ghana, Giulio Piras from Italy and Giustino Di Giovanni also from Italy will be judges. Lerena, who will bid for the third defence of the belt he won in 2017, has 21 wins against a loss. Mann, a former Global Boxing Union and WBO international champion rated No 21 by the IBO, is undefeated after 15 fights.