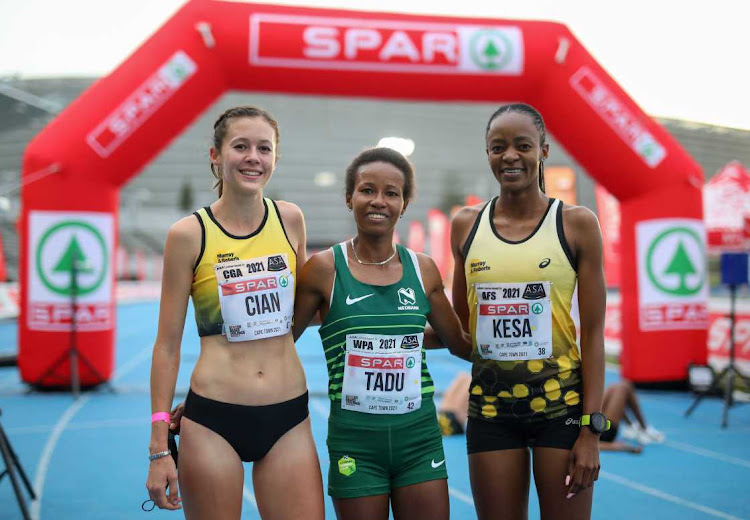 With four races to go for the Spar Grand Prix women’s 10km series to conclude, SA runner Kesa Molotsane has ruled herself out from winning the title this year.

Molotsane feels it will be tough to catch up with Ethiopian athlete Tadu Nare, who has dominated the two opening races in Pietermaritzburg and Cape Town at the weekend.

Nare maintained her lead at the top of the Grand Prix series when she stormed over the line in a time of 31:28 at Green Point Stadium on Saturday.

Molotsane finished second in 34:10, an  improvement on her fourth-place finish in Pietermaritzburg two weeks ago.

Following successive victories in the series, the 20-year-old Nare is now the runaway favourite to win this year’s Grand Prix.

“To be fair and very honest with me, I don’t think I will win the Grand Prix this year, especially with Nare being on that level. I think it is going to take a lot from me,” Molotsane told the media after the race.

“It will take a miracle. I don’t think I want to put myself in that situation to say this is what I’m expecting from myself.

“I’m glad that we still have athletes of that calibre in the Grand Prix. It is not pleasing that we could not get more today (Saturday) due to circumstances but she is on a different level and we are happy that we could still get such times.”

In the absence of defending champion Helalia Johannes, Glenrose Xaba and Irvette van Zyl, Nare took full advantage as she cruised to victory again. This time the absence of Xaba, who finished in the opening race, made things even easier for the lithe Ethiopian.

On Saturday, she led from start to finish, tearing the field apart on the two-lap course around Green Point Stadium.

“It is going to take a lot for any South Africans to get to that level but we are not far off. We’ve seen Glenrose coming through, Irvette van Zyl and others coming through, including our little juniors.

“With my injuries, I think they are limiting me to a point where I had to be content with the decision that I’m going to come here not for times but positions.

“So that delays the process of my progress to get to that level again. Now I have to compromise running faster but at least to maintain the position,” Molotsane said.

The third leg will take place in Durban on Saturday.

Ethiopian Tadu Nare of Nedbank is running away with the Spar women’s 10km Grand Prix.
Sport
8 months ago

Ethiopian middle and long distance runner Tadu Nare of Nedbank will be the athlete to beat in the Cape Town leg of the Spar Grand Prix 10km race at ...
Sport
8 months ago

Molotsane backs herself for 10km title

Former Grand Prix champion Kesa Molotsane plans to stake her claim in this year's series by winning the second leg of the Spar 10km Women's Challenge ...
Sport
8 months ago
Next Article