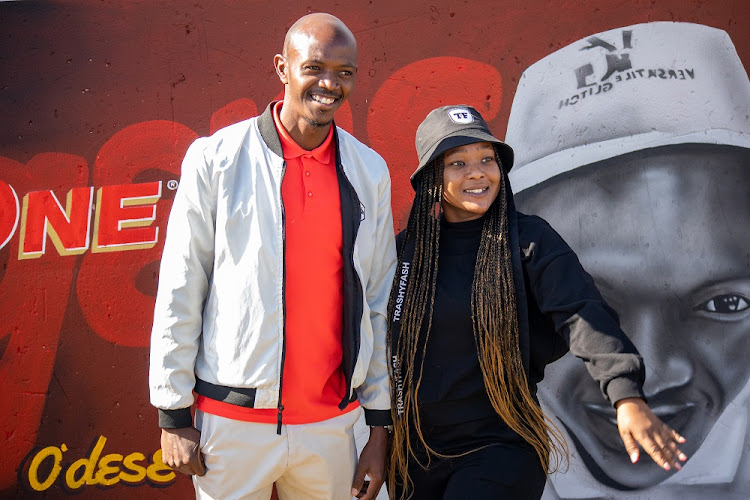 Eugene Nkosi and Zanele Sibiya are Mamelodi's Bar One One starters.
Image: Supplied

When Zanele Sibiya was still a food and beverages operations student with the school of tourism and hospitality at the University of Johannesburg she had a chance encounter with a homeless man.

She gave him food that she had prepared during one of her classes and the homeless man exclaimed that it was going to be the first time in his life that he’d be eating food prepared by a chef.

Sibiya decided there and then to open a soup kitchen that didn’t just serve soup.

SowetanLIVE spoke to Sibiya in her hometown of Mamelodi, where she was one of two people being honoured by Nestle Bar One for its One Starter campaign. The campaign has identified 60 people that are making a difference in their community by starting an initiative that has benefited the community.

These One Starters as the brand has called them have a mural painted in their honour in the community, at these murals the community gets to enjoy free WiFi. They can also find out more about the campaign using a QR code on the murals.

Now a businesswoman, the 27-year-old Sibiya is also a motivational speaker, tutor and runs an organisation called the Za Development Trust where she says she aims to develop people. The organisation is a subsidiary of her business Za Elite Food and Bev Solutions. Once a month Sibiya offers food to the destitute at an informal settlement near the University of Pretoria Mamelodi campus.

“I usually pop up… there is no set date because the soup kitchen all depends on when I have enough money. I normally walk into the squatter camp and tell one person per section to tell more people we’re here,” she says.

Mathobela's passion for wine takes her to the top

Katlego Mathobela’s can-do attitude and her passion for wine have steered her to her true career path.
S Mag
1 month ago

Sibiya makes bunny chow, briyani or mac 'n cheese and other types of dishes. She says she is often able to feed 200 people, this includes adults and kids. This normally costs about R4,000. Although she’s not big on announcing her charity, she has no shortage of volunteers who help with transporting the food.

The second mural honouree was 32-year-old Eugene Nkosi, who started a choir, Kutlwano Ya Batsha Music Group, to keep the youth in his neighbourhood in Mamelodi busy and earn some money.

“I didn’t even know that I could write a song, what I knew back then was that I could play soccer but yeaa, I decided to start a choir. At  first it was for entertainment but along the way it became something that helped us make money,” Nkosi says.

Nkosi and Sibiya were showed their murals with members of the media amid a lot of fanfare.