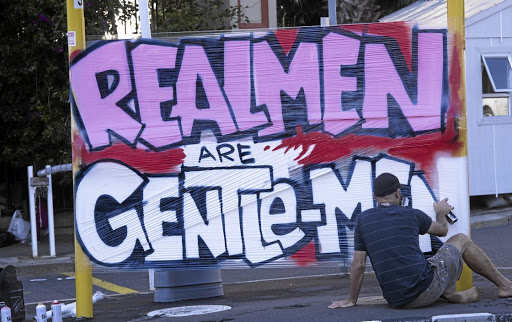 A march outside parliament against gender-based violence. Society is grappling with such issues because of the way men are raised and socialised, not allowed to be 'soft'. /Brenton Geach/Gallo Images

I recently participated in a webinar hosted by Cosatu. My contribution was around the theme "tackling harmful gender norms, creating a violence-free society".

This talk reminded me of a show by Eusebius Mckaiser where he hosted professor Kopano Ratele. The topic of the show was "How we can learn, as men, to say 'I love you' to each other". Speaking to the need for men to openly be vulnerable and in touch with the "emotional" side of themselves - without feeling any shame.

One of the harmful gender norms found within our society is that men are taught to shy away from displaying or talking about their emotions and vulnerabilities. An expression of these would deem them soft and weak.

In our society, these are characteristics reserved solely for women. Ratele stated that patriarchy affords a limited range of emotions for boys/masculine subjects. Masculine subjects only have access to hard emotions that make vulnerability inaccessible to them.

I believe part of the reason men or boys use violence as a reaction is because society does not allow them to access other, healthier forms of dealing with conflict and effectively communicating their emotions. In fact, it is revered when a boy child responds to violence against them - with violence.

Later in life, we then expect these very boys to handle conflict and violence in much more constructive ways.

Men have a duty to stand up as the perpetrators of femicide, rape and abuse of women and children
Opinion
10 months ago

Neglecting that this is the very same boy who, as a child, we expected to hit back at those who teased or hit him - as if this process of unlearning will occur organically. The adult who thinks it is normal to hit their partner is the same adult who was once taught to hit back.

This is not in the aim of justifying violence, but I am tracking the varied, probable contribution and role our society's conception of manhood might have had in the levels of violence between men and violence inflicted by men against women and children.

I think it would not be incorrect to say society's conception of masculinity, which robs men of tools to articulate and be comfortable with vulnerability and their emotions, plays a regressive role in our quest for a violence-free society. Often men do not see that patriarchy is harmful even to them. The fight against it would not only benefit women when it is done away with.

Patriarchy robs us of the most basic and positive parts of being purely human. Our parts that include being vulnerable, being able to show affection to another man and not have to follow up with the words "no homo" - a colloquial term often used by men after saying "I love you" to another man - to assure the recipient that they are not gay. We should not be existing in a world that would depict a man as gay or soft solely because they openly express love for the men in their lives. Love is such a natural feeling; it should not have to be packaged in a way so as to avoid judgment.

Before we are men, we are people. By design, patriarchy takes away this fundamental feature of being human, that is we too deserve to cry, love and fully embrace that which comes with our emotions.

I am not saying there is a direct correlation between men increasingly being able to express their emotions and the decrease of gender-based violence, or violence all together.

I am however saying this would be a step in unravelling that which comes with patriarchy, which leaves men with a limited basket of resources that they can reach into when wanting to express their emotions or vulnerabilities, oppressing them and those around them.

SA’s criminal justice system must be reorientated to allow victims of crime to see themselves at the centre, women to have faith in it and for ...
News
10 months ago

The past few weeks have seen a significant increase in the number of women being raped and killed in our country.
Opinion
11 months ago