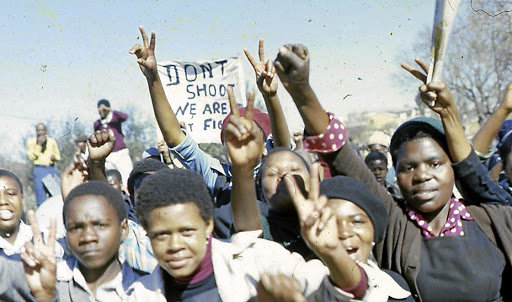 Youth protesting on the streets of Soweto. The writer says the youth are still fighting the struggle of their predecessors and have not started fighting their own struggles.
Image: Times Media

It is of great importance to reflect on history to read and interpret present circumstances with an intention to forecast the future.

As Philip Abrams (1982:08) so cogently put it: "Doing justice to the reality of history is not a matter of noting the way in which the past provides a background to the present, it is a matter of treating what people do in the present as a struggle to create a future out of the past."

It is an undisputed fact that history lays a foundation for what we must do in pursuit of the desired state of affairs.

The 1944 generation of young lions led by the most capable leader Anton Muziwakhe Lembede shook the status quo. This was a generation confronting white domination under the influence of African nationalism as their philosophy of struggle under the motto: "Africa's cause must triumph".

Young people of 1968, like the youth of 1944, came together and with Steve Biko as a face of their liberation project, the Black Consciousness Movement was birthed, emerging from institutions of higher learning. It became a movement that revived mass political opposition to white minority domination.

The youth of 1976 under the influence of Black Consciousness confronted the apartheid armed forces with bare hands against the imposition of Afrikaans as a medium of instruction. This was the most resolute generation. To them Black Consciousness was a philosophy and a way of life.

Former June 16 student leader Seth Mazibuko wakes up every morning in the same house that he grew up and lived in at Orlando East for the past 60 ...
News
1 year ago

The 1976 youth uprising undoubtedly changed the course of history. The attainment of freedom became vividly inevitable.

Questions that keep on crossing my mind are, for instance, what is it that we stand for as a current generation? What becomes our generational mission? How are we different from the generations that came before us?

Twenty-one years into the democratic dispensation (in 2015), our generation came together in institutions of higher learning under the banner of #FeesMustFall, #RhodesMustFall and #OutSourcingMustFall (fallist movement) and demanded implementation of the decolonial project.

The rainbow nation proved to be futile. The attainment of political freedom failed to resolve structural problems that young people are affected by. In the institutions of higher learning, education is structured in a way that the rich are guaranteed access to the exclusion of the poor black majority. Workers such as cleaners and security guards are paid low wages. It is for this reason that the fallist movement was able to gain ground.

As the current generation we have defined our struggle as that of fighting institutionalised racism, patriarchy, structural disparities and systematic exclusion of black people. Our generational mission is to continue with the struggle for total liberation of oppressed natives.

We live in a country with racialised inequalities. Gender-based violence is on the rise. Youth unemployment is sky rocketing. Alcohol and drug abuse are prevalent.

As the youth we are still fighting the struggle of our predecessors. We have not started fighting our own struggles. We are still in pursuit of the egalitarian society in its true sense.

Therefore, as a generation our mammoth task is the completion of what our forefathers started. We must give meaning to Lembede's morally upright call: "We are not called to peace, comfort and enjoyment, but to hard work, struggle and sweat.

We need young men and women of high moral stamina and integrity; of courage and vision.

In short, we need warriors. It is only this type of youth that will achieve the national liberation of the African people."

The youth must and will be in the forefront of struggle for the attainment of true freedom.

*Khanyile is a youth activist under three years house arrest

'Education must be accessible to all'

Sharon Letlape from the Vaal University of Technology, a member of the Central Command Team, believes that the struggles faced by the 1976 youth are ...
News
1 year ago

If #FeesMustFall activist Bonginkosi Khanyile continues to violate his correctional supervision conditions‚ he could find his sentence transformed ...
News
1 year ago

Some of our fave young celebs tell us about their experiences of living as a young person in a democratic South Africa, as well as what June 16th ...
S Mag
1 year ago
Next Article