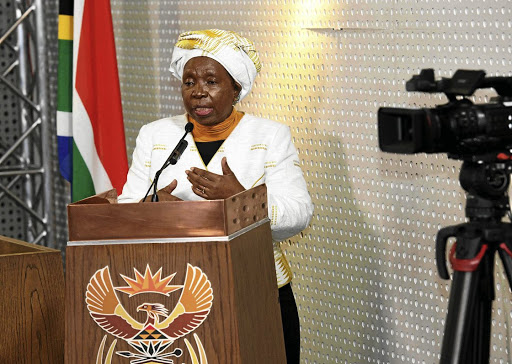 President Cyril Ramaphosa and Nkosazana Dlamini-Zuma have to be lauded for tirelessly ensuring that South Africa contains the coronavirus pandemic. /Jairus Mmutle/GCIS

Many political pundits predicted that Dlamini-Zuma would disappear gracefully into the darkness, eradicating the Zuma surname from the SA's political landscape.

Fast-forward to 2020. SA - and the world - finds itself in the midst of a global pandemic, Covid-19. Foes have become friends, political parties with varying political ideologies are working hand-in-hand, and Ramaphosa and Dlamini-Zuma are side-by- side again, but this time as an impressive dynamic.

Along with minister of health Zweli Mkhize, Ramaphosa and Dlamini-Zuma have to be lauded for tirelessly ensuring that SA contains the virus.

Perhaps the ANC "unity" theme at Nasrec just needed a nudge in the right direction, although some pundits are still getting their pay check from speculating that it is just a front.

I want to single out Dlamini-Zuma, perhaps to the dismay of cigarette smokers, and laud her for her firm and steadfast leadership over the last few months. She is not given a lot of credit for the work she has done for SA and Africa as a whole. Despite her stellar credentials, she has for years endured being reduced to being little more than the former wife of Jacob Zuma.

Former president Jacob Zuma believes the cause of dictatorships in Africa is leaders persecuting their predecessors when they get into office.
News
1 year ago

Hence many predicted the end of her political career after her defeat in Nasrec.

Were the predictions founded on a solid analysis of SA's political landscape? It is hard to say, but at the heart of it was misogyny. In short, misogyny can be defined as prejudice against women and informs aspects of society.

I bring this up for two reasons. Firstly, Dlamini-Zuma separated from Zuma years ago. Secondly, doomsayers deliberately overlooked her credentials and tied her political fate to her ex-husband - a classical case of misogyny. A woman's identity is formed and therefore understood in relation to the structure, in this instance patriarchy.

To her credit, Dlamini-Zuma gracefully and diligently undertook a ministerial position under Ramaphosa. For many, she has personified patriotism by honouring her calling to serve her country; to some, unfortunately, she is still Jacob Zuma's ex-wife.

A few weeks ago, I watched as she was bashed on social media for announcing that tobacco would remain banned under the lockdown, a day after Ramaphosa had said tobacco would be unbanned.

SA endured years of corruption under the Zuma era, but I can categorically state even with this deterioration of state mechanisms, the decision to keep the tobacco ban could not have been made by one person. But somehow detractors have successfully painted Dlamini-Zuma as a tyrant. This is blasphemous.

Key to SA's success in fighting the pandemic has been the consultative nature of our governance, but misogyny refuses to see this. Numerous claims have been made about Dlamini-Zuma pulling the strings, again blasphemous. She is a minister, she cannot single-handedly take a decision of that magnitude.

Her credentials and political acumen speak for themselves. The work that she has done over the last few months can't be overlooked and should not be reduced to her announcement on the tobacco ban.

The odds were stacked against Winnie because of who the party and some in the ANCWL believed she was.
Opinion
3 years ago

The assessment and critique of civil servants is a crucial part of a vibrant constitutional democracy.
Opinion
1 year ago

'I am not Mazzotti's friend': Nkosazana Dlamini-Zuma to MPs