Ramaphosa's web of secrecy is undermining our democracy 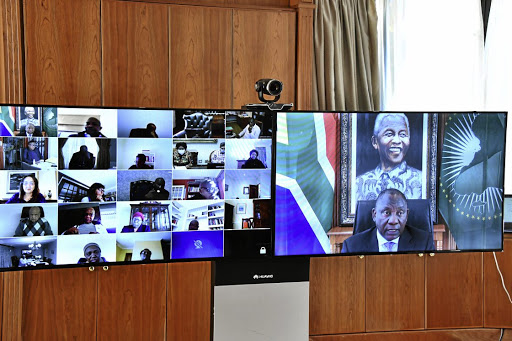 President Cyril Ramaphosa and the national coronavirus command council have taken it upon themselves to make decisions that have far-reaching consequences for society. / BABA JIYANE

The Covid-19 pandemic is having serious implications for our governance system. Operating during lockdown and under the Disaster Management Act, the government is bypassing processes and platforms that exist to ensure open and accountable governance.

Having private consultations with certain stakeholders we are told represent interests of whole sectors, and then making decree-like announcements followed by long ministerial briefings is proving disastrous.

This time it is the department of basic education backtracking on the reopening of schools. Minister Angie Motshekga should have learnt lessons from her colleagues' messy handling of the tobacco ban.

Why announce a date only to reverse the decision at the 11th hour? Just as President Cyril Ramaphosa should not have announced a lifting of a ban on tobacco without first checking with his team and advisers, she should have done extensive consultations prior to committing to a date.

These instances of government indecision, including how the president handled the reopening of churches, are a warning light to the risk posed to our constitutional democracy.

Our system of checks and balances is premised on the principle that no one branch of government should have unlimited power, with the other branches able to oversee and scrutinise the use of that power.

Ramaphosa and the national command council have taken it upon themselves to make decisions that have far-reaching consequences for society. This kind of concentration of power in the hands of the few goes against the tenets of our institutional design.

It has become a custom for the command council to report about engaging with key stakeholders and experts in deciding on alert levels and regulations.

These consultations are not open to the public. Nobody but the president, ministers and those they meet with are privy to the arguments presented to sway decisions in any direction.

Show us the minutes for all lockdown decisions, DA demands

The DA wants to know exactly how government has made its lockdown decisions, party leader John Steenhuisen said on Friday.
News
2 years ago

A thornier issue is who gets access to the president? Given that these people are not elected representatives, what gives them the status to meet behind closed doors to convince him to take decisions that affect the public and body politic?

The national command council has misapprehended the national state of disaster and lockdown to mean a suspension of the democratic practice of open public debate and consultation.

The most appropriate platform for public involvement is parliament and legislatures whose mandate it is to enable public participation.

We need to be wary of the power of lobbies in policy-making who use their influence to push sectional interests, using the lockdown as a cover.

During the fifth administration led by former president Jacob Zuma, private lobbies pushed their agendas under the guise of promoting radical economic transformation and this was the path to state capture.

Transparency is not a burden but a safeguard both for the public and for the executive. When issues are aired publicly, it creates the conditions for the cultivation of public trust in the government's decisions.

Ramaphosa's reluctance to substantiate decisions, to have stakeholders put their arguments forward in public forums and to give MPs an opportunity to debate and vote on policy - given that they were elected to do just that - is undermining democracy.

It is also eroding public trust and adding to the high levels of frustration and anxiety that are the result of the uncertainty brought by the Covid-19 pandemic.

As the economic situation is slowly being normalised, it is time to return to the normal practice of law as provided in the constitution.

Government owes it to citizens to be transparent on lockdown

Transparency. This is a core principle of good governance and one that characterises open democratic societies.
Opinion
2 years ago

Government are not medical experts or qualified economists

Up until now I have been supportive of the SA government's Covid-19 response.
Opinion
2 years ago

Announcing a R500bn relief package last week, President Cyril Ramaphosa gave his most important speech yet as president with his reference to ...
Opinion
2 years ago
Next Article