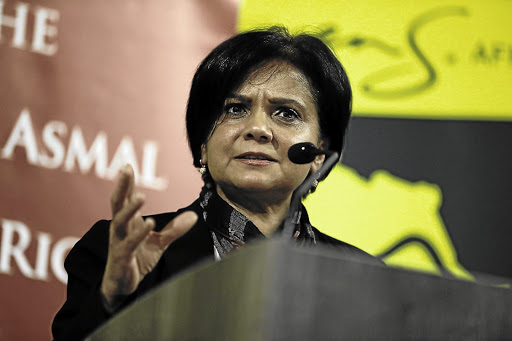 National director of public prosecutions advocate Shamila Batohi, as a major stakeholder in the administration of justice, has not made her stance on gender-based violence and rape clear. /Thulani Mbele

It was Women's Day last week Friday and of all the gatherings across our country that celebrated women, the 15th conference of the South African Chapter of the International Association of Women Judges that was addressed by chief justice Mogoeng Mogoeng at the University of Mpumalanga was the most encouraging.

This is encouraging, in the sense that finally there is an acknowledgement that rape and gender-based violence cases require much more attention. Mogoeng further said the judiciary had the "responsibility to educate the nation about how the law works". In essence, the chief justice was saying that gender-based violence and rape cases are not so black and white and that all stakeholders, including society, are required to put their heads together to curb it.

And in interrogating issues around cases involving sexual abuse and gender-based violence, I pondered about the National Prosecuting Authority and its role in ensuring that it too interrogates these issues.

I ended up asking myself: where is the national director of public prosecutions, Shamila Batohi, given the gravity of sexual abuse? But I remembered that Batohi has not even uttered a single word about the calamity of sexual abuse.

I did however remember how a friend of mine once told me about a joke at the NPA about certain rape cases: "at the tavern, to the tavern, from the tavern - no prosecution".

Protect women against sex pests in the workplace

The other issue this raised was why prosecutors are so reluctant to take these "difficult-to-prove cases" to our courts.

Yes, we have heard the argument: the NPA cannot prosecute cases where there are very little prospects of success in court. But the truth is that prosecutors may be more concerned about their performance targets instead.

Prosecutorial performance targets was highlighted in a recent report (Rape Justice in South Africa 2017) where researchers expressed their disapproval.

In the report, researchers recommended that rape cases that are closed by prosecutors "should be monitored to identify and reduce the impact of target chasing on premature closure of cases".

It was recommended further that prosecutors' performance targets should "consider the nature of rape cases" and that the prosecution authority should set up audit processes to review decisions not to prosecute cases with a special focus on "the no evidentiary aspects of such decisions".

We do not know if the NPA took heed of these recommendations, but I did hope that Batohi took note of the chief justice's valuable comments on Women's Day. The bottom line is that the way the NPA treats cases may be a major contributor to this national crisis and may also be perpetuating rape myths that plague our society.

A woman can be raped at a tavern!

Rape victims in Diepsloot have to travel as far as Soweto, some 50km away, to receive postrape medical care and counselling as the township's two ...
News
4 years ago

A Randfontein serial rapist who was caught thanks to the bravery of his final victim has pleaded guilty to the rape of three women and the attempted ...
News
3 years ago
Next Article