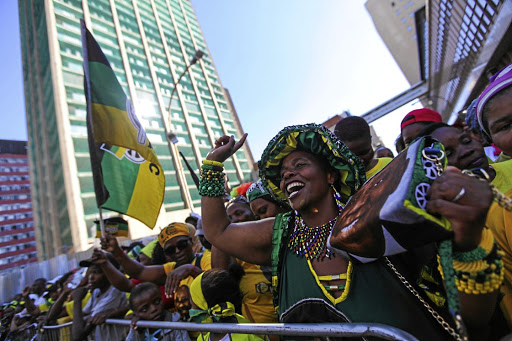 ANC members gather at Luthuli House, the party headquarters in central Johannesburg, to celebrate its victory in the sixth general election. /Alaister Russell

Winning the 2019 general election should buoy the ANC. After all, the electorate reaffirmed their confidence in the party's ability to continue to lead society.

A 57.5% haul at the polls, although representing a five-point drop from its 2014 levels, was on the higher side of expectations.

For a party that presided over the near collapse of government institutions and the near decimation of the economy, the ANC has been rewarded handsomely.

It has lost 19 seats in the National Assembly and a combined 24 seats in the provincial legislatures. But it remains in a commanding position.

While the party of liberation is celebrating its victory, there may be a temptation to feel that it is generally doing alright and just needs to tweak a little here and there.

The sense of trepidation that attended the election campaign with appeals for South Africans to forgive the governing party and give it another chance could easily give way to a sense of complacency.

President Cyril Ramaphosa has assured investors that the ANC-led government is not allergic to working with the private sector.
News
3 years ago

The fact that the ANC is a deeply factional and divided party cannot be glossed over. The relative calm was only a suspension of hostilities for the sake of ensuring that all hands were on deck to secure control of the state.

As president of the ANC Cyril Ramaphosa will be able to ascend to the Union Buildings uncontested. That's the easy part.

Having campaigned on the promise of turning the economy around, making the country more accommodating to investors as well as arresting the decline and decay of state institutions, he has to demonstrate his intention to keep that promise straight off the bat.

The ANC should not think it can play with the good faith of those citizens who took the opportunity to vote. At 65.99%, the voter turnout in the 2019 general election is the lowest ever since 1994. Of the just under 27-million people who registered to vote, only 17.5-million voted.

The ANC's retention of power should be viewed against this backdrop.

It is not a complete victory. Much of the voting population opted to stay away rather than lend their voice to the formation of government and the configuration of the country's legislatures. The ANC's win is therefore not a vote of confidence in the fullest sense.

President Cyril Ramaphosa has promised the nation that he will end corruption in government - whether some people like it or not.
News
3 years ago

The lower voter turnout does not reflect well on the opposition either. Instead of galvanising a greater number of voters to come out and choose a different political home, the proliferation of new small parties only led to a splitting and dilution of the opposition vote.

Only 11 of the opposition parties - excluding the DA and EFF - made it to the National Assembly. This means 31 of the 45 smaller parties lost out completely.

Given that they raised enough money to register and contest, these parties went into these elections with a false sense of self, with many a party president thinking they would actually by sheer force of their personality or appeal garner enough voter support to get even one seat at the least.

A temptation would be to look at the decline in voter turnout and construe it to purely mean a growing apathy among the voting-age population. It is clear that more and more South Africans are questioning the meaningfulness of casting their ballot.

On the other hand, the high levels of protest across the country tell a different story, not of an apathetic citizenry but of one that has decided that participating in a protest is more efficacious than voting.

The voter turnout is still on the higher side when compared to that of other more established democracies of the West. But this should not for a moment lead one to think that it does not say something about a trend towards disengaging from the formal processes and platforms of participation in democracy.

The consequence of the "lost nine years" has been to erode faith in the democratic system of which voting is a significant ritual. It is a worrying trend.

All is not lost. The next five years are an opportunity for the government and opposition alike to show that democracy does work and can work for all.