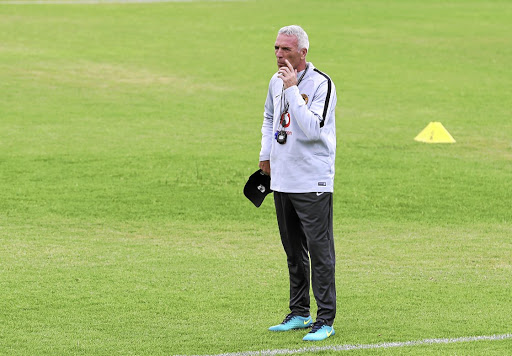 New Kaizer Chiefs coach Ernst Middendorp aims to do things differently to his first stint at the club when he was considered by many to be temperamental, arrogant and tactically negative.

Middendorp rejoined Amakhosi for a second tenure last week. He was first at the helm from 2005 to 2007.

The German tactician was roped in to take over from the underwhelming Giovanni Solinas, who was axed after four months.

The 60-year-old feels he is in a better position now than all in those past years when he arrived in the country for the first time.

"Coming into the country not knowing the environment, of course you discover new some things," said Middendorp.

"It's more than a decade, now I have this background information. I never stopped observing the PSL and there is definitely a huge advantage if you compare to 2005 to where I am right now."

So poor was his relationship with the fans that they gave him the moniker "Middendraw" and "Mazinyo.com" in reference to his falling dentures.

He plans to have improved relations with the Amakhosi faithful, whom he called selfish when he got fired in 2007.

"I think the supporters should be selfish. It's a clear understanding - they want results and I am aware about it," he said.

Middendorp hit the ground running at the weekend as he has South African citizenship and did not need a work permit.

His first test will be against SuperSport United at the Mbombela Stadium tomorrow night. Kickoff is at 7.30pm.

He insisted that he will be able to get the best out of the players in this short space of time.

"The advantage is that some players I have worked with at the club and some I have played against, so I know them.

"For me it's a journey of 16 games until the end of the season. There is a clear understanding that the points must come," he said