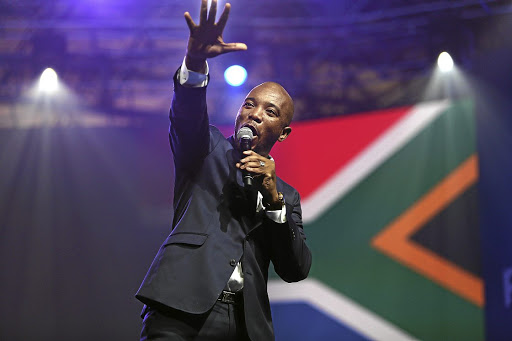 DA leader, Mmusi Maimane has a hard task of convincing undecided voters that his party is not a racist project.
Image: ALON SKUY

The scene is set for a stiff contest in the lead up to next year's general election.

Although each party has chosen a campaign platform, corruption and accountability will be a key battleground.

The ANC is grappling with untangling itself from the web of state capture.

The list of cadres that are worthy of sanction for breaking the law and/or violating their oaths of office is growing longer.

There is huge pressure, therefore, on the New Dawn administration headed by President Cyril Ramaphosa to be seen to act decisively and swiftly.

The ANC has much work to do to convince the voting public that it can turn itself around from years of mismanaging state resources, of failing to deliver on key policies, of botching up service delivery and weakening economic performance.

It has lost the moral high ground. The liberation dividend will no longer payoff.

Ramaphosa's institution of commissions of inquiries into various government departments including intervention in provinces such as the North West is a promissory note.

It is aimed at convincing the voters to give the ANC just one more chance.

The hope is that Ramaphosa can make masses forgive and forget the abuse they've suffered under previous administrations.

If party wants to maintain its anti-corruption watchdog tag, it must now bark at its own over the VBS saga
Opinion
3 years ago

It's a tough ask.

The DA is also caught in the grip of alleged maladministration and corruption.

A protracted tiff between the party and Patricia de Lille, who resigned yesterday as Cape Town mayor, has laid bare its internal contradictions.

The DA caucus in the city has called for De Lilles head, decrying her leadership style and accusing her of malfeasance.

De Lille is now implicated by a report which was commissioned by council, recommending that she faces disciplinary action and be criminally charged.

Five councilors resigned from the party in protest, claiming victimisation on account of their race and pledging support for De Lille.

They claim that the DA does not take black leadership seriously in its internal structures.

The optics are not good.

However, the DA thinks that it has transcended the widely held perceptions that it is a party that promotes the interests of whites at the expense of blacks.

Party leader Mmusi Maimane's dismissal of the charge of racism in the party is ill-advised. It unfortunately feeds into the perception that he is a puppet serving a minority agenda in a party that does not take black leadership seriously.

Meanwhile, in the City of Tshwane, mayor Solly Msimanga is pitted against city manager Moeketsi Mosala who has been fingered in an investigation of tender irregularities.

The UDM's Nelson Mandela Bay mayor Mongameli Bobani has also been fingered by a Hawks probe into corruption and now faces a motion of no confidence by the DA.

His party has denied all allegations and refuses to act against him.

A series of revelations in the VBS saga have highlighted how not only ANC leaders but how the EFF and its leaders may have benefitted. The EFF has dismissed the allegations.

The UDM and EFF, the anti-corruption crusaders, are exposing their hypocrisy.

Now each party has to prove their said commitment to good governance accountability, transparency and can be judged on how they deal with these allegations of corruption.