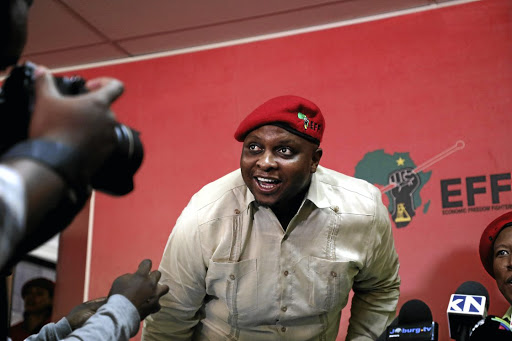 EFF deputy president Floyd Shivambu during a press briefing in Johannesburg on Tuesday over allegations that he and the party benefitted fraudulently from the looting of VBS bank.
Image: Thulani Mbele

The EFF has styled itself as an anti-corruption hound, exposing perpetrators of malfeasance within the state.

They often call for the investigation, prosecution and resignation or dismissal of those they finger as corrupt on the basis of preliminary reports and findings and sometimes yet-to-be-substantiated allegations.

It is therefore of great public interest to see how the party itself reacts and responds to similar allegations made against its own.

The latest details on the looting of the VBS Mutual Bank contained primarily in the Reserve Bank report by advocate Terry Motau and Werksman's Attorneys titled the Great Bank Heist, and subsequent investigative journalism, have linked Floyd Shivambu to the saga.

If the kind of revelations that have come to light from the reports were implicating a member of the ANC top six, for example, EFF leader Julius Malema would be waxing lyrical about how that individual should be brought to book.

What we know is that the Motau report identifies Brian Shivambu, Floyd's brother, as one of the 53 persons who are said to be "amongst the biggest recipients, directly and indirectly", of gratuitous payments from the more than R1.8bn looted from VBS.

In a statement following the release of the report, Brian stated unequivocally that he had not received any payment from VBS but from Vele Investments for the work done by his company, Sgameka Projects. "The contract entered between Vele Investments and Sgameka Projects does not state anywhere that my company will receive payments from VBS Mutual Bank," the statement reads.

This may be true, but it does not necessarily mean he didn't benefit from VBS.

Motau's report notes how Vele and VBS are inextricably linked: "It emerges very clearly that VBS and Vele have been operated as a single criminal enterprise" controlled by Tshifhiwa Matodzi, chairperson of both Vele and VBS, during the period covered by the investigation.

Brian does not deny that he received R16m payment from Vele. To give him the benefit of the doubt, he may have received funds funneled from VBS by Vele unbeknown to him. But ignorance does not change that he benefitted from the proceeds of crime as the Motau report alleges.

In a follow-up to the release of Motau's report, Pauli van Wyk, reporting for Daily Maverick, referred to sources that implicated Shivambu, alleging he pocketed R10m transferred to him by his brother's Sgameka Projects, some of which also allegedly made its way to the EFF.

Shivambu has since denied these allegations.

“He was not conflicted‚” Malema said.
News
3 years ago

At an EFF press conference on Tuesday, Malema dismissed the allegations outright, saying that Shivambu had subjected his financial statements to the party's leadership for scrutiny and it could not locate the payment.

This is unconvincing, to say the least. The EFF leadership are not qualified forensic investigators. Why should we take their word for it?

The argument that there must be evidence presented to Malema first before Shivambu can be subjected to an investigation is laughable. It is the very reality of allegations of misconduct that should give rise to a probe.

In his statement, Brian submits that, "my brother Floyd Shivambu is the deputy president of the EFF and not the owner of my businesses. I committed to him that I will give him support which I have done where possible".

It is quite common for siblings and family members to support one another's endeavours. But that is not what is under question here.

The allegation is that the assistance Brian gave to Shivambu may have involved Shivambu benefiting from proceeds of looting of VBS.

Only an investigation by a law enforcement agency or credible and qualified third party can ascertain this.

If indeed the EFF is beyond reproach, an investigation into the veracity of the allegations will vindicate Shivambu and only strengthen the party's credibility.

They owe it to the public.