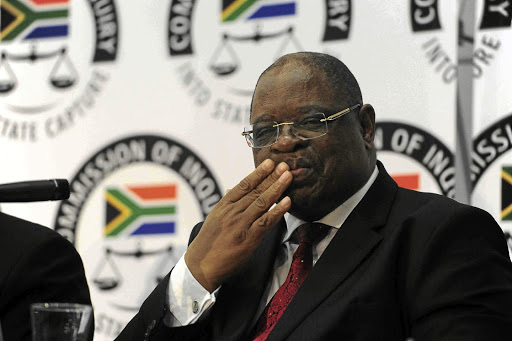 The commission of inquiry into state capture, chaired by deputy chief justice Raymond Zondo, has detailed explosive revelations of the abuse of power, says the writer.
Image: Thulani Mbele

Over the past couple of years, numerous revelations of impropriety, corruption, maladministration and mismanagement in state entities have flooded the public discourse.

That these have come to light is to be credited to brilliant investigative journalism and courageous whistleblowers who have put themselves on the line.

It is ultimately the executive that is responsible to ensure there are consequences for those who are culpable, but the executive itself needs to be held to account for allowing things in government departments and state-owned enterprises to deteriorate to the extent that they have.

In terms of state machinery, that oversight role belongs to the legislature. It is parliament's job to take the executive to task. But that is only one part of the story. It is ultimately citizens who must demand accountability and compel politicians to take responsibility for the rot that has set into state institutions.

Last week, President Cyril Ramaphosa announced that he has appointed a commission of inquiry into the Public Investment Corporation (PIC). The corporation manages about R2-trillion in investments, making it the biggest fund manager on the continent.

The growing trend of setting up commissions has prompted a debate about the necessity for such processes. The question is whether this just amounts to the president avoiding taking difficult decisions on the fate of those implicated.

These commissions have already detailed explosive revelations of the abuse of power, mismanagement of funds and blatant flouting of regulations, to the detriment of the public interest.

Former finance minister Nhlanhla Nene fell by his own testimony at the state capture inquiry and in his interim report Nugent has recommended that Ramaphosa fire suspended SARS commissioner Tom Moyane.

Suspended SA Revenue Service (Sars) commissioner Tom Moyane had the tax agency pay a law firm R120‚000 to read a book in order to determine whether ...
News
3 years ago

The PIC, and in particular its head Dan Matjila, has been accused of taking improper investment decisions that have benefited businesses and individuals closely associated with the entity's leadership, including Matjila's girlfriend.

Recently, the UDM launched a court bid in an attempt to force Nene to fire Matjila. It is this cloud hanging over the PIC that has compelled the president, once again, to act. And the commission has been tasked with getting to the bottom of these allegations and to investigate the necessity to review and change the PIC's operating model.

The developments in the Zondo and Nugent inquiries have illustrated why these commissions are necessary and effective.

These commissions, if their findings do lead to clear outcomes and apportionment of culpability, do put pressure on the executive to act. It is important to state this because they can also be a mere whitewash or leave more questions than answers like with the arms deal and Marikana commissions.

Cleaning up the rot in the state is very messy. It is both legally mired as well as politically risky.

The commissions are therefore strategic for Ramaphosa as they provide the necessary cover if and when he takes decisions to sack individuals and restructure the operational framework of state entities and institutions.

But that the commissions make damning findings is no guarantee that the executive will take any action.

Ultimately, the onus lies with the public to demand accountability, to compel political leadership to act. Citizens are duty-bound to guard and defend democracy and good governance by being active agents in the political life of society.

There is a need for more civil society-led initiatives, by social movements, business, labour and faith-based communities, to apply pressure on politicians to be answerable and accountable to the people.

Former finance minister Nhlanhla Nene has resigned as a member of Parliament‚ 10 days after stepping down as minister.
News
3 years ago
Next Article