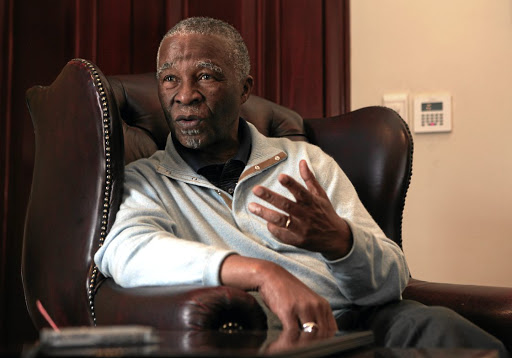 Former president Thabo Mbeki whose foundation has had a paper leaked that is critical of the ANC's land policy and decries the party's departure from nonracialism.
Image: RAYMOND PRESTON

In a leaked document, the Thabo Mbeki Foundation has reportedly expressed its opposition to the ANC's current approach to resolving the land question.

One, that the ANC has departed from its original commitment to a nonracial and nonsexist society; two, that framing the land question in terms of redress for historical injustice is tantamount to excluding white people contrary to the aims of the negotiated settlement, and three, that the ANC has not sufficiently involved the private sector in the land reform process.

That the document was leaked means that it was not meant for public consumption. But now it is in the public domain and has implications for the credibility of political foundations in South Africa.

Although the authorship of the paper is not attributed to former president Thabo Mbeki, it cannot be denied that it is a reflection of his own thinking and sentiments on what the political party he once led, and is a member of, is doing post his tenure.

This brings into the spotlight the role of political foundations in SA, especially where the patrons in whose names they are founded remain active.

It is not the first time in recent history that Mbeki has courted controversy for using his foundation as a platform to air his political views in relation to his perspective on contemporary ANC leadership.

The most notable was his article in which he seemed to justify the controversial points of his administration including the disastrous policy on HIV/Aids as well as Zimbabwe.

In the paper in question, there is very little that tries to critically engage or reflect on Mbeki's own contribution or failures, as a former leader, to resolving the land question.

Not only does the paper decry what the foundation views as the ANC's departure from its values but it goes on an offensive against the most recent former president of the party and country, Jacob Zuma.

The paper explicitly places the blame for the ANC's departure with its historical posture at Zuma's door. It reflects on Zuma's legacy, quoting him as he called on "black parties to unite and use their two-thirds majority to change the constitution".

In addition, the paper supports the interventions of Cope leader and once close Mbeki ally Mosiuoa Lekota, who has raised very similar concerns to those raised in the paper.

The paper's warnings over the alienation of the private sector and threats to economic stability also harks back to what Mbeki has been lauded for, which is his management of the economy wherein his administration decreased government debts and produced surpluses.

Democracy encourages robust debate, dialogue as well as contestation, over these kinds of important issues such as the question of land reform. And as a citizen, Mbeki has the right to air his views on such matters.

But there is a caveat.

The ANC in KwaZulu-Natal has accused former president Thabo Mbeki of going overboard by criticising his successor‚ Jacob Zuma‚ for calling “black ...
News
3 years ago

It is true that the foundation is an independent organisation that should be free to air its views and contribute to the national discourse. That is not the problem with the paper.

The problem is Mbeki's use of his foundation's platform to distance himself from his party and to sanitise himself as if he has no responsibility to bear for its present state is disingenuous.

It diminishes the credibility of the foundation when it seems to be only willing to heap praise on its patron and not engage with the nuances of his legacy.

This is the danger of most political foundations across the country's social and political landscape.

Whilst working to keep the names and legacies of their patrons alive, the foundations must be careful not to become instruments for rewriting those legacies in an attempt to shore up their own currency and relevance.