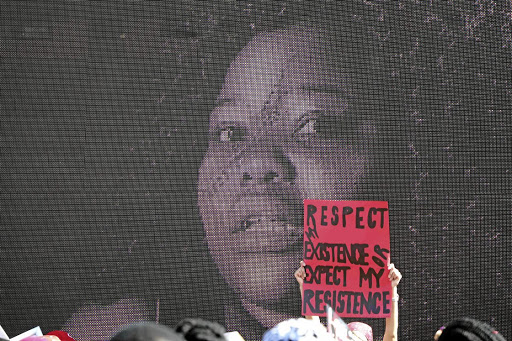 Thousands of women marched to the Union Buildings in Pretoria last week under the #TotalShutdown movement to protest against gender-based violence.
Image: Thulani Mbele

The total shutdown was our own "me too" moment. One of the unintended consequences of our liberation is the near-death of the women's movement. It was encouraging to see thousands of women saying so far and not further.

Thank you to all the mothers, sisters and nieces who took part in that march which will go a long way towards ensuring that women will not be silent any longer.

I agree fully with the exclusion of us men in that march because the tendency of most of us is to want to take over. As men we can't lead this struggle in the same way that the liberation Struggle in this country could not be led by whites.

It is women in the main who are at the coalface of violence on their bodies, on their emotions and their self-worth. It only makes sense for them to lead us so we understand what they're going through every day of their lives.

It would be silly of men to ask questions such as: why did they not allow us to be part of this march? Are women saying that all men are trash or all men are violent? These questions fail to understand the gravity of violence against women.

So strictly speaking, it is violence against women. I am convinced that understanding this context properly we will go a long way in men understanding who is violated every day and who is violent every day, and as women said on Wednesday last week, their bodies are not a crime scene.

#TheTotalShutdown organisers have given President Cyril Ramaphosa until Thursday to respond to their demands.
News
4 years ago

There are many instances where the criminal justice system generally fails women; such instances include attitudes of some policemen and women when women and other gender non-conforming persons report cases of rape, sexual violence, domestic violence, and harassment.

How many times have you heard of survivors being asked questions such as: "What were you wearing? Why were you at the bar at that time of the night? Why did you drink his alcohol and expect not to sleep with him?"

It is as if these questions seek to convey a message that it serves you right, you deserve what they did to you. We desperately needed a total shutdown moment seeing how women in particular are violated at the drop of a hat.

Once again, thank you to those courageous women, some of them had to walk bare-breasted to drive their pain and anguish home.

It could not have been easy for them to bare it all other than as a desperate sign of a cry for help. Here is a message for us men: it can't be business as usual, we should take heed and be allies to the women's struggle.

I asked one of the participants of the march, Suzan Maloka, what her impressions were. This is what she said: "The gender machinery in our country has been weakened by differences on how poverty impacts on us all, different races. The march reflected lack of support from white ladies, it is like they are just beneficiaries of our efforts as any wins include all women.

"It is worse with Indians and coloured people, you could hardly see them.