EFF kingmaker strategy means it abdicates any duty for governance 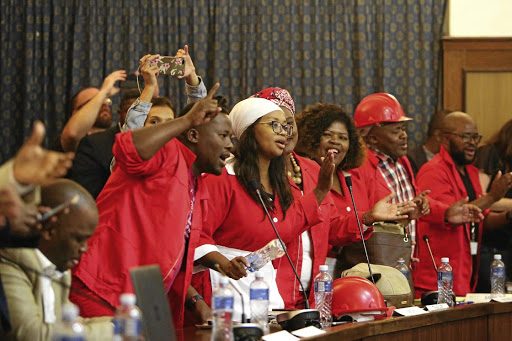 By not signing a coalition agreement, the EFF has extricated itself from the responsibility that comes with committing to a programme of service delivery and governance, says the writer.
Image: Werner Hills

In a dramatic turn of events at the Nelson Mandela Bay Metro (NMBM), the DA's Athol Trollip was ousted as mayor.

It was almost inevitable. Trollip had already survived numerous previous attempts of a vote of no confidence in him, mostly because those sittings degenerated and collapsed.

The EFF vowed early in the year that Trollip would not complete his term as mayor after it resolved to review its support of the DA following the DA's refusal to support the EFF's policy on land expropriation without compensation.

To use the situation we see in NMBM and Tshwane to make a point about a crisis in coalition politics may be bordering on exaggeration, but it is important to explore this to make sense of what these developments actually mean.

Coalition politics are premised on power sharing. They are a politics of cooperation and consensus where parties necessarily have to make trade-offs between pressing their differences and contradictions, and ensuring that government actually works.

The 2016 local government elections were notable for producing hung councils in some of the country's big metros.

Hung municipalities were not a new phenomenon, neither was government by coalitions. But the concept of coalitions post-2016 has come to prominence on the one hand because the metros are not some obscure municipalities on the periphery of the country.

On the other hand none of the two major parties, the DA or the ANC, got an outright mandate from the voters.

Barring going into a power-sharing agreement with each other, the DA and ANC were compelled to form alliances with other parties to avoid perpetually hung councils that would necessitate fresh elections. The EFF emerged as a kingmaker in these hung metros, giving it the opportunity to play the ANC and DA off against each other.

An important fact that is often lost in the debate about developments in the metros is that the EFF did not enter into coalition agreements with any party - neither the DA nor the ANC. This has placed the EFF in a position of strength.

The EFF could have traded its numbers in a once-off deal with either of the two major parties, but that would have limited its influence in the long run. The decision not to enter into coalition deals means that the EFF has perpetually extended its kingmaker role.

It is this strategic move that sees the EFF punching above its weight in the metro councils and that makes it indispensable to the ANC and the DA's ambitions.

All that the EFF agreed to was to lend its votes to the DA to allow it to control councils, elect mayors and speakers and to pass budgets.

The EFF is not bound by a formal agreement or contract with the DA. It isn't and never was the DA's coalition partner.

‘We stand behind Msimanga’: Maimane

The EFF was therefore not going against any commitment when it partnered with the ANC and UDM to oust Trollip. It cannot be said to have betrayed any trust.

What the EFF is doing in Tshwane then has to be seen in the same light. It is again not breaking any agreement or trust with the DA in deciding to vote alongside the ANC.

The developments in NMBM and Tshwane do not therefore spell a crisis in coalition politics.

Although the EFF may have achieved a strategic coup in not tying itself to any agreement, its strategy is not necessarily good for democracy.

By not negotiating or signing a coalition agreement, the EFF has extricated itself from the responsibility that comes with committing to a programme of service delivery and governance. The EFF can only be described as opportunistic.

Its decision not to enter into coalition agreements means that it can act arbitrarily and on a whim and cannot be held to account for its actions even when its political stratagem is detrimental to the effectiveness and efficiency of local government.