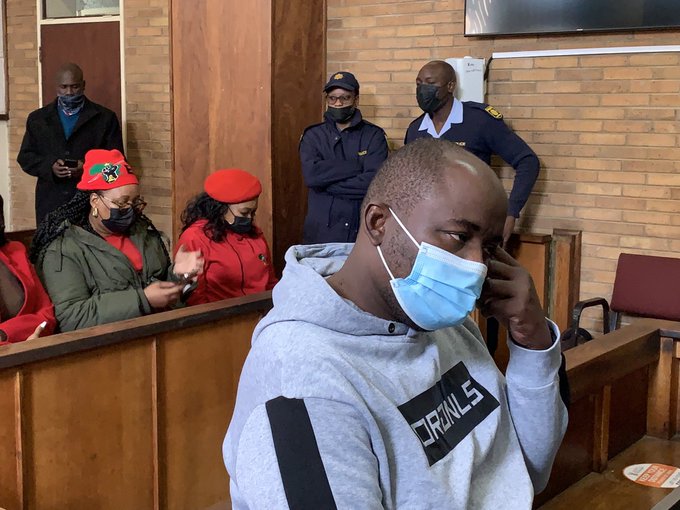 Sipho Mkhatshwa says he was nowhere near Hillary Gardee when she was kidnapped and murdered. He is applying to be released on bail.
Image: Graeme Hosken/TimesLIVE

Delays in obtaining DNA results, ballistics and cellphone records have pushed the trial of three men accused of the kidnap-murder of IT graduate Hillary Gardee to next month.

The bail application by one of the accused, Sipho Mkhatshwa, has also been delayed by a month.

Prosecutor advocate Ntsika Mpolweni told the Mbombela court the state required a postponement because they still need to finalise DNA results, citing a backlog of about a week at the laboratory as their machines had broken down.

They are also waiting for ballistic reports and cellphone records analyses.

The director of public protections still had to make a decision on whether the case would be tried in the regional or high court.

Counsel for two of the accused, Philemon Lukhele and Mduduzi Gama, opposed the state's request for a postponement.

“The last time the state asked for a postponement, giving the same reasons as today [Thursday]. It is with regret that they want to do the same thing they asked the last time. No circumstances stated by the state warrants a postponement,” advocate Nqobizitha Mlilo said.

The state could not arrest people without concluding the necessary investigations.

“The state cannot put hurdles in the way of accused 2 and 3. They need to be heard. A person charged must be tried in a reasonable time.”

Security beefed up as Hillary Gardee accused appear in court

Bester Street which leads to the Nelspruit magistrate's court has been barricaded with barbed wire and a large police presence ahead of the court ...
News
2 months ago

Mlilo said in circumstances of an “unreasonable delay”, as in this case, the court should conduct an inquiry on when the state would finish investigations.

Magistrate Annemarie van der Merwe granted the state's request for a postponement, saying the state gave an explanation on the reasons for the delay and she was pleased there was an undertaking to expedite the process.

“The court is aware that a four-week postponement is never enough to finalise some of the expert reports.”

She instructed the state to ensure that at the next appearance the outstanding matters were finalised and a decision made on which court would handle the trial.

The partly heard bail application of Mkhatshwa, whose lawyers quit on him at the previous appearance, has been postponed to July 7.

Van der Merwe ordered all three suspects to be assessed by a doctor and any injuries recorded. This after allegations were made by the accused that they had been assaulted by police after their arrest.

The state is expected to prove to the court on Friday that murder accused Sipho Mkhatshwa is lying about not being in Mbombela, Mpumalanga, when ...
News
2 months ago

Sipho Mkhatshwa, in his bail bid, says he was nowhere near Hillary Gardee when she was kidnapped and murdered.
News
2 months ago

Supporters of political parties EFF and ANC together with community members gathered outside the Nelspruit magistrate's court on Thursday morning ...
News
2 months ago
Next Article