Zondo deplores way in which advocate was arrested inside courtroom 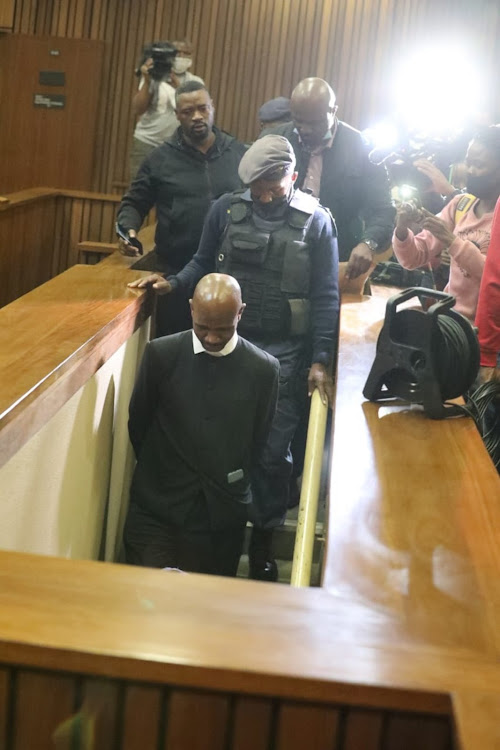 adv5 Advocate Malesela Teffo is led to the holding cells in the Pretoria high court on Thursday. Chief justice Raymond Zondo said the conduct of the police in effecting the arrest inside a courtroom was an assault on the dignity of the court and the judiciary.
Image: Antonio Muchave

Chief justice Raymond Zondo said the arrest of anybody, let alone a legal practitioner, inside a courtroom is unacceptable and should not happen.

Zondo made this comment after the arrest of advocate Malesela Teffo inside the high court in Pretoria last Thursday where he was representing four of the accused in the Senzo Meyiwa murder trial.

Zondo said the SABC had asked for his comment on the arrest of Teffo on the day, and he had not seen the footage of the incident and did not at that stage have information about it. He indicated that he was unable to comment on the matter.

Commenting on Tuesday,  however, Zondo said: “There was no justifiable reason the SAPS could not have waited for advocate Teffo to leave the courtroom and the court premises before they arrested him.

“After all, as I understand the position, the warrant of arrest had been issued about two months earlier and waiting until Teffo had left the court premises would not have made any difference.”

Deputy minister of state security Zizi Kodwa says he will take the recommendation by the Zondo commission to have him removed from his position on ...
News
3 months ago

Zondo bemoaned the conduct of the police.

“The conduct of the SAPS in effecting the arrest inside the courtroom and the manner in which the arrest was effected on a legal practitioner and, therefore, on an officer of the court, was an assault on the dignity of the court and the judiciary.

“An officer of the court was arrested in a manner that was totally unacceptable and showed disrespect for the judiciary,” Zondo said.

He said the constitution places an obligation on all organs of state, including the police, through legislative and other measures, to “assist and protect the courts to ensure the independence, impartiality, dignity, accessibility and effectiveness of the courts”.

Zondo said his statement was not about whether Teffo should have been arrested or not. It was about the place where the arrest was effected and the manner in which it was done.

Zondo said he hoped the police would make sure that there were no similar incidents in future.

Advocate Malesela Teffo has himself to blame for courtroom arrest, cops say

Police top management say there was nothing untoward about the dramatic arrest of the advocate representing Senzo Meyiwa’s alleged murderers inside ...
News
3 months ago

Advocate Malesela Teffo was granted R10,000 bail on Friday after his dramatic arrest the day before in the Pretoria high court when the Senzo Meyiwa ...
News
3 months ago

Adv Malesela Daniel Teffo, who is representing four of the five accused on trial for the murder of Senzo Meyiwa, has not only taken centre stage in ...
News
3 months ago
Next Article