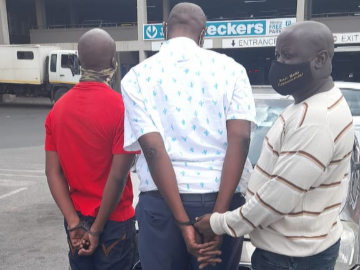 The Hawks have arrested alleged members of an extortion syndicate in Limpopo.
Image: Supplied

The Hawks have come to the rescue of a Limpopo businessman whom two men allegedly extorted money from after he “reportedly used the services of a prostitute”.

The suspects allegedly accused the businessman of infecting a sex worker with HIV. The Hawks swooped on two men “suspected of running an extortion racket linked to prostitution” on Wednesday.

Hawks spokesperson Capt Lloyd Ramovha said the Hawks' serious corruption investigation team arrested Ramashile and Kgobe during a sting operation near the Savannah Mall in Polokwane for allegedly extorting money from a victim who reportedly used the services of a prostitute during November 2021.

“Preceding the Hawks' intervention, the victim, who is a prominent businessman, reportedly made several payments amounting to thousands of rand to the suspects. This was after he was allegedly blackmailed and accused of infecting a prostitute, who they claimed to be a relative of theirs, with HIV,” said Ramovha.

“They further threatened to expose his encounter to his family and associates.

“At a later stage, the pair returned to the victim with allegations that the prostitute had died due to the disease complications. They demanded more money, which led to their arrest during a sting operation.”

Ramovha said R4,000 in cash and cellphones were recovered from the suspects.

The two face charges of corruption and extortion. “It is believed they might have preyed on many more victims who may be too ashamed to come forward,” he said.

“The case has been postponed to January 4 2022 for a formal bail application.

“Meanwhile, the implicated woman is still at large as investigations continue.”

Ramovha urged people who have fallen victim to the suspected syndicate to come forward.

A former police crime intelligence officer was convicted on charges of corruption in the Eastern Cape on Tuesday after he tried to extort a witness ...
News
10 months ago

Gauteng police say they have been investigating several groups in Tshwane, who target infrastructure projects to hijack them or extort money from ...
News
1 year ago

Licensing officials ask for bribe but get handcuffs instead

A Northern Cape traffic official and driving instructor were paid the bribe money they allegedly asked for - but summarily ended up in handcuffs.
News
1 year ago

The name Boko Haram strikes so much fear in the township of Mamelodi among businessmen and foreign shop owners where a vigilante group has wreaked ...
News
1 year ago
Next Article