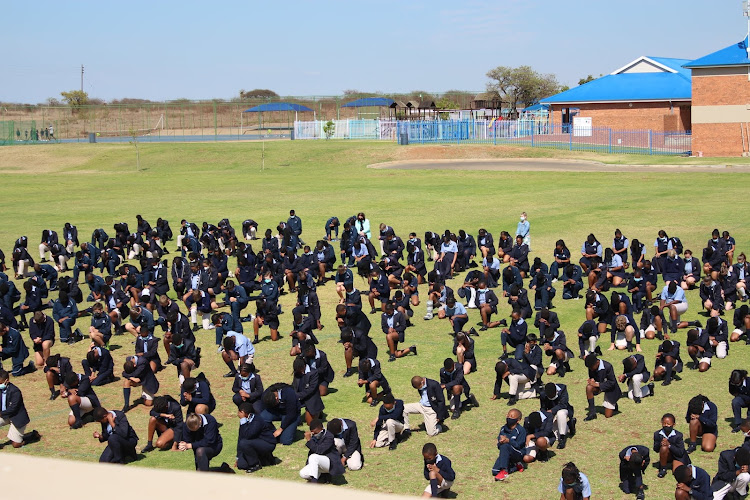 Classmates of the kidnapped brothers knelt in prayer for their safe recovery on Thursday.
Image: Curro Heuwelkruin Independent School

“You are in our prayers.”

This is the message shared by the Curro Heuwelkruin Independent School, as the search continues for the Moti brothers — Zia, 15, Alaan, 13, Zayyad, 11, and Zidan, 6 — who were hijacked and kidnapped in Limpopo on Wednesday.

Pupils went down on one knee and prayed for them to be safely reunited with their parents, Nazim and Shakira Moti of Polokwane.

The department of social development told SowetanLIVE sister publication TimesLIVE it has dispatched a team of social workers to both the Moti family and the school.

Police have launched a massive manhunt, including activating the air wing, for a group of suspects involved in the forceful removal of the four schoolchildren from a vehicle that was transporting them to school at about 7am, said Brig Motlafela Mojapelo.

“The children were forcefully removed from their scholar transport by a group of about seven suspects armed with rifles,” he said.

The mother of the four brothers who were kidnapped on their way to a Limpopo school on Wednesday, allegedly by seven armed men, has requested ...
News
6 months ago

The 64-year-old driver was on the R37 road near the N1 bypass when he was suddenly blocked by two vehicles, a white Kia Sorento and black Mercedes-Benz. The attackers, dressed in white overalls, got out and started firing shots randomly.

The suspects forced the four children out of the vehicle into their Mercedes-Benz and drove off in the direction of the R81 road, leaving the distraught driver at the scene with his vehicle, said Mojapelo.

The victims' cellphones were later recovered after they were found dumped at Flora Park.

The motive for the kidnapping is unknown at this stage.

Speaking to TimesLIVE on Thursday, Lizette Lancaster from the Institute for Security Studies, said from 2011 until March last year, SA saw a 131% increase in kidnappings. About 5% of those reported to the police were for ransom or extortion.

Anyone with information is asked to urgently contact the investigating officer, Capt Ntlane Rasedile, on 082 565 8566, crime stop on 0860 010 111, or the nearest police station or use the MySAPSApp.

Zidan, Zayyad, Alaan and Zia you are in our prayers🙏

Gunmen with assault rifles snatched four children from their driver's vehicle as they drove in morning traffic to school.
News
6 months ago

Four children were hijacked along with their driver on Wednesday morning en route to school in Bendor, Polokwane.
News
6 months ago

A well-known Limpopo businessman who is facing charges of tender fraud, theft and forgery has been granted permission to travel overseas to finalise ...
News
6 months ago
Next Article