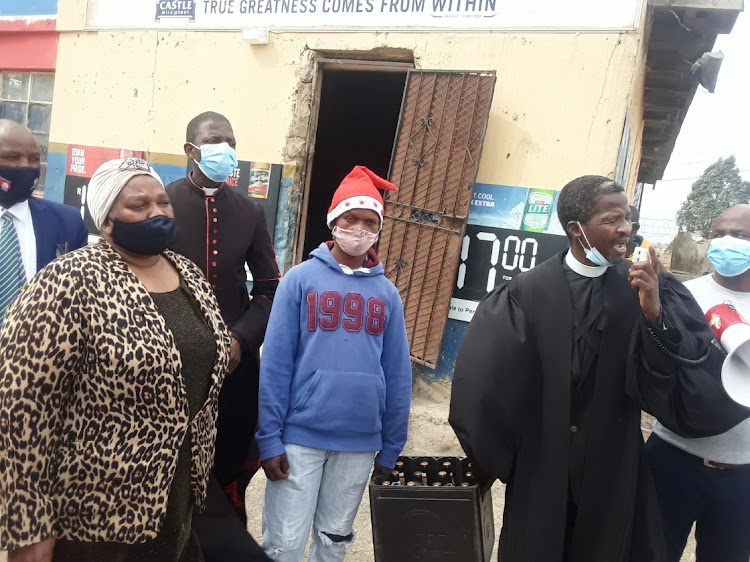 Young men enjoying beers at a tavern in Tyarha village in rural Libode gasped with disbelief on Thursday when a group of pastors and church leaders, clad in their robes, turned up and stood everyone to a round.

Some patrons panicked, fearing the church had come to bring down the wrath of the Lord, but the pastors quickly reassured them, saying they were there on a mission to speak to young people about serious issues facing the community.

The clerics, from the SA Council of Churches (SACC) in the Nyandeni sub-region, said they wanted to sensitise young people who waste their lives in taverns and shebeens about the evils of gender-based violence (GBV), including femicide, when men specifically attack women and often in their own homes.

“I thought it was a joke but I’m sure we will definitely go home drunk because this alcohol is probably well-fermented,” he said.

He said he appreciated learning more about GBV and femicide and promised to play his part to fight the social scourge.

Ndamase almost lost her life when her house was set alight by unknown attackers late in 2020.

SACC Nyandeni sub-regional chair Rev Surgeon Boko told the young patrons their gesture of a free round was not intended to encourage boozing.

He said they wanted to get the patrons’ attention as they had a very important message for them.

Boko said: “I once drank alcohol as a young boy and my mother did not like it.

“Some drink because they are frustrated about not being able to find jobs. This beer does not mean they should go and kill people. It does not mean you should rob people or rape women and children.”

Earlier, Boko, whose Presbyterian Church of Africa congregation is located in Tyarha, told the Dispatch that taverns and shebeens should be places where people went for fun and entertainment.

However, they were places where vile and heinous crimes against women and children were hatched over beers.

What made it worse, he said, was that some taverns were drug dens.

“Women and children are under attack.

“Only a few churches play a role in shaping society at the moment. We felt we needed to be visible in our own area to help fight the scourge of GBV and femicide.”

He said church leaders often became too comfortable preaching to the converted.

Boko said the time had come to put on their suits and hit the streets to make a positive change in society.

Boko said churches were not immune to the horrific abuse of women and children, citing the arrest of a 50-year-old self-proclaimed prophet on charges of statutory rape, statutory sexual assault and abduction after marrying a 15-year-old schoolgirl earlier in 2021.

“We want our voices, the voices of the churches, to be heard,” he said.

Churches have always played a key role in people’s lives, he said.

People are baptised by priests and when they marry a pastor presides over the wedding. Upon death, pastors officiate at funerals.

Nkosi Ndamase lauded the SACC for the initiative, saying many women in rural areas died gruesome deaths at the hands of men.

Some were killed after being accused of witchcraft and others for their state social grants and pensions.

She said in the villages under her jurisdiction, many young people were so hooked on drugs they became violent to a point where their own parents were frightened of them.

Boko said they wanted to extend their awareness campaign to all taverns and shebeens across Nyandeni.

A group of more than 40 individuals and 16 organisations has called on acting National Assembly speaker Lechesa Tsenoli to appoint an impartial ...
News
9 months ago

Women are always respected, from ancient periods onwards, and in all religions they have been given due importance.
Opinion
9 months ago
Next Article