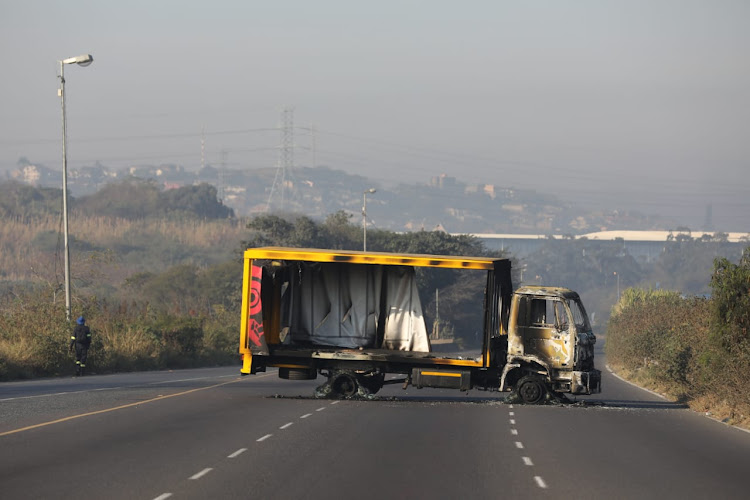 A burnt truck blocks a road in Durban on July 12 2021. There may be stricter protection of national roads and truck drivers given the potential for such incidents to spiral and compromise economic activity, says Municipal IQ. File photo.
Image: SANDILE NDLOVU

Looting was a dominant feature in the recent unrest in KwaZulu-Natal and Gauteng, which stands in stark contrast to what usually happens during service delivery protests in SA.

This is according to Municipal IQ, a local government data and intelligence organisation that collects information on service delivery protests staged against municipalities to quantify and better understand the nature and trends of such events.

According to the organisation, while service delivery protests in any given month are spread across SA, the vast majority of recent unrest took place in KZN and Gauteng (66% and 33%, respectively), and in metros (66%).

“As of the end of June, 22% of 2021’s service delivery protests took place in KwaZulu-Natal, and 46% were in metros spread around the country. This is in sharp contrast with the concentration of unrest in KwaZulu-Natal and in particular eThekwini, Johannesburg, Ekurhuleni, Msunduzi and uMhlathuze, which together accounted for 75% of incidents,” said Kevin Allan, MD of Municipal IQ.

National Assembly speaker Thandi Modise has called for an extraordinary extended debate on the unrest, looting and destruction of property in parts ...
News
1 year ago

It noted that eThekwini was the worst hit metro, followed by Johannesburg and Ekurhuleni.

“While service delivery protests can degenerate into looting, this tends to be tangential to most such protests and tends to take place where protests are staged, rather than becoming the focus of protests.”

Karen Heese, an economist at Municipal IQ, said most service delivery protests, even those billed as #Shutdowns, were not typified by looting but rather the closing of businesses.

“Organisers also dissociate themselves from such incidents when they occur. It is, however, noteworthy that in recent months there have been several incidents in which protesters have looted trucks that have been caught up in service delivery protests,” she said.

Service delivery protests tended to be contained within the areas in which they erupt, with police monitoring the periphery, the organisation said.

“It is possible that this approach was taken to deal with recent unrest, without an appreciation of the scale of looting that was to unfold, to the point where numbers became overwhelming,” Municipal IQ said.

“Going forward, and this may affect the policing of service delivery protests, there may be stricter protection of national roads and truck drivers, given the potential for such incidents to spiral and compromise economic activity.”

Looting and riot death toll rises to at least 117

At least 117 people have died in riots and looting in Gauteng and KwaZulu-Natal.
News
1 year ago

Protests and looting which saw store shelves stripped bare in Gauteng have been the worst encountered by law enforcement, a private security firm ...
News
1 year ago
Next Article