The NPA has been instructed to oppose bail for those arrested during looting and public violence in recent days.
Image: Alaister Russell/The Sunday Times

Protests and looting which saw store shelves stripped bare in Gauteng have been the worst encountered by law enforcement, a private security firm said on Wednesday.

“If you look at the looting and the masses involved in it, and it has been everywhere, it has definitely been the worst,” said Fidelity Services Group CEO Wahl Bartmann.

Two of the company’s staff died during the chaos and several have been injured.

“It has been very difficult and it is costing our customers, the public and SA. I think it has a huge economic impact.”

Bartmann said the company was responsible for protecting about 80% of the major malls in the country, many of which have been targeted during the civil unrest.

Fidelity Services Group had deployed its own air support and specialised teams to respond to violence unfolding on the ground.

WATCH | From the sky: Looting in SA shocks the world with apocalyptic visuals

He said its members continued to be very active in KwaZulu-Natal on Wednesday, but the looting had eased in Gauteng.

“There can be many reasons for that. Sites and centres have been vandalised and looted already so we are monitoring different areas and seeing what we pick up on intelligence.”

Bartmann said choppers provided air support overnight at malls and shopping centres in Tsakane in Ekurhuleni where there were reports of violence.

“We are observing the activity there. There is a lot of information coming through which we are verifying to see if it is accurate and our air support will give us feedback.”

In a bid to bring riots and looting in Gauteng under control, soldiers were deployed in Soweto on Tuesday.

SA National Defence Force (SANDF) spokesperson Siphiwe Dlamini said on Wednesday the military would be deployed according to demand from the police.

“We don’t give numbers of members being deployed. We deploy according to the police plans because the police have identified areas in which they need more support.

“Police are leading the operation, not us.”

BusinessLIVE reported late on Tuesday that state security agencies had indicated the deployment of 2,500 soldiers would be “enhanced” on Wednesday. 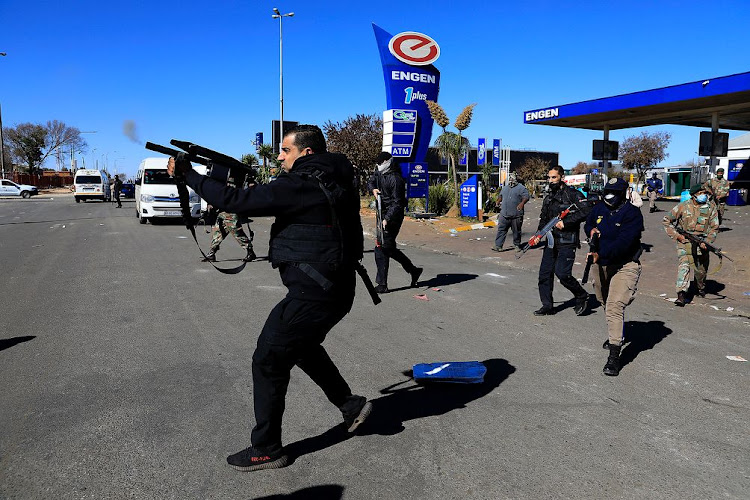 Col Brenda Muridili, speaking on behalf of the National Joint Operational and Intelligence Structure (NatJOINTS), said an update would be released later on Wednesday.

On Tuesday Muridili said at least 72 people had died in the riots and civil unrest in Gauteng and KwaZulu-Natal.

She confirmed the death of Ekurhuleni metro police officer Meshack Mahlangu, shot when responding to looting at Sam Ntuli mall in Katlehong on Monday evening when a mob fired live rounds at police.

Muridili said seven police officers — three in KwaZulu-Natal and four in Gauteng — were recovering from injuries sustained while responding to the violence.

The National Prosecuting Authority (NPA) said 87 people would appear in the Randburg magistrate’s court on Wednesday.

Police minister Bheki Cele on Wednesday described the situation in Tshwane as “satisfying”.
News
1 year ago

Crowds looted shops and businesses on Wednesday, defying government calls to end a week of violence that has killed more than 70 people, wrecked ...
News
1 year ago

Staff and pharmaceutical shortages, temporary closures and treating patients for protest-related injuries are further pressures on an already ...
News
1 year ago

Thousands of businesses in Gauteng and KwaZulu-Natal which have been hit by sporadic looting sprees remained shut on Tuesday as the dire affect of ...
News
1 year ago
Next Article