Impact of violence, looting will be felt most by the poor in coming months: Cyril Ramaphosa 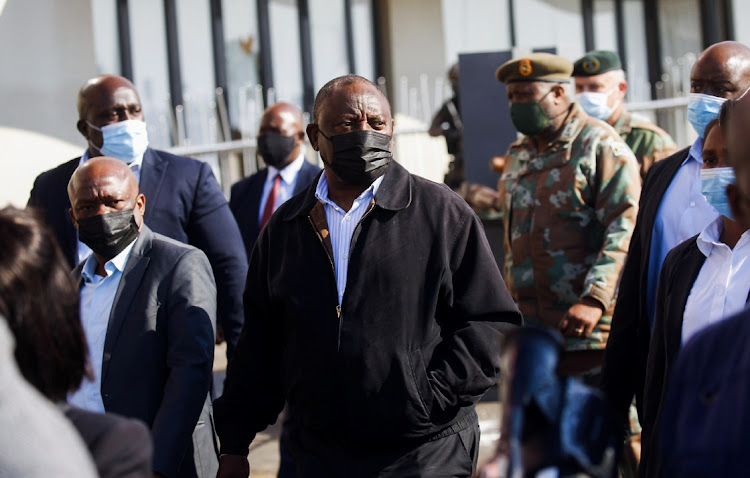 President Cyril Ramaphosa has made an impassioned plea for South Africans to work together to mitigate the effects of unrest and riots that destroyed property and led to the loss of more than 200 lives.

The true impact of the destruction would be felt mostly by the poor in the coming months, he said on Monday.

“Businesses have been destroyed and livelihoods lost at a time when we are already feeling the strain one-and-a-half years into a global pandemic. The economic damage has sapped many of the budding shoots of recovery we were witnessing a few weeks ago.

“As we work to stabilise the country and secure essential supplies and infrastructure, we must work together to mitigate the effects of this unrest on society’s most vulnerable,” Ramaphosa wrote in his weekly newsletter.

He called on those with the means to assist with the provision of food relief for those affected by the violence and to support businesses in distress. Ramaphosa emphasised it was important to rebuild.

“We are not only rebuilding our country after the destruction of the past week. We are rebuilding after the devastation of decades of dispossession and exploitation. We need to fundamentally transform our economy and our society, deepening our efforts to create employment, lift millions out of poverty and ensure the country’s wealth is shared among all its people.”

The president said he was not oblivious to societal issues which the country grappled with and admitted the challenges may have escalated the unrest.

“The events of the past week are a stark reminder of how deep the problems are and how far we still have to go. These events must propel us to act with greater purpose and speed.”

Reflecting on Nelson Mandela Day on Sunday, he hailed the ability of citizens observe the day through acts of service and generosity despite the disruptions.

We are not only rebuilding our country after the destruction of the past week. We are rebuilding after the devastation of decades of dispossession and exploitation.

“This Nelson Mandela Day was different to previous years. It took place in the aftermath of a week in which parts of our country were gripped by violence and mayhem,” he said.

“It was a week in which we were confronted by deeply unsettling images of desolate owners standing outside the shells of what were once thriving businesses, of looted shops and warehouses, of burning trucks and buildings and streets strewn with debris, of anxious citizens barricading their communities, and of snaking queues of people lining up to buy food.”

While cleanup efforts had commenced in many areas with citizens standing up to protect their communities, Ramaphosa said the spirit of Mandela was embodied more than ever before.

“What I have seen in the past few days is a people united, resolute and determined to protect this country from anyone and anything that wants to destroy it.

“Those who lit the tinderbox of this unrest hoped to mobilise our people by exploiting their conditions of hardship. They were counting on citizens falling for crude propaganda designed to turn them not just against the state, but against each other.

“What they were not counting on was the enduring ability of South Africans to unite in the face of a common threat. This has always been our greatest strength as a nation, and it came to the fore.”

Today we launch the #SowetanRebuild initiative, a call to action to begin the process of restoring small businesses and economic centres that bore ...
News
1 year ago

More than 50 schools have been damaged, torched and looted during the unrest that has gripped KwaZulu-Natal.
News
1 year ago

I stood and watched mayhem play out – businessman

Lawrence Tseye knew there was nothing he could do to prevent looters from making off with whatever they wanted when one of them pulled out a knife on ...
News
1 year ago

Nokukhanya Makhathini used all her savings and pension fund to open an internet cafe to help develop her historically disadvantaged community of ...
News
1 year ago
Next Article