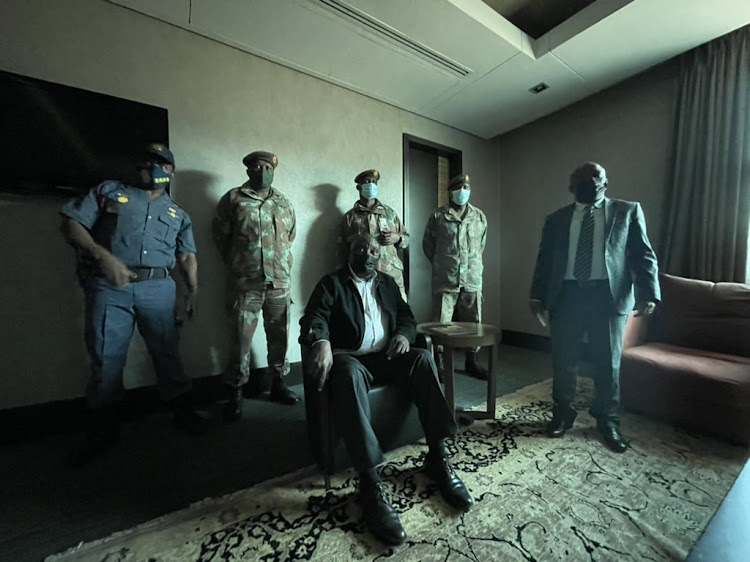 President Cyril Ramaphosa receiving a briefing on his arrival in KwaZulu-Natal. He is assessing the impact of the recent public violence and the deployment of security forces in the province.
Image: PresidencyZA

The unrest that gripped KwaZulu-Natal and Gauteng was “quite clearly instigated”.

“All of these incidents of unrest and looting were instigated. There were people, who instigated it. Police have a line of sight of what was happening. We are after those people. We have identified some of them,” President Cyril Ramaphosa said on Friday.

However, he admitted that “we don’t know what their full intentions are”.

Ramaphosa landed on Friday morning in Durban, which has been ravaged by violent protests, vandalism and looting this week. However, he will not be visiting areas, such as the suburb of Phoenix, and the provincial capital, Pietermaritzburg, that have been most affected.

Ninety-five people have died in the province.

Ramaphosa conceded that government and security agencies could have done better.

“We were overwhelmed by the situation ... we did not want to get in a situation that could have resulted in more mayhem.”

He applauded ordinary citizens for defending the assault on the country's democracy.

Ramaphosa said he did not regret initially linking ethnic mobilisation to the unrest, because communication, including voicemails, showed that the “instigators” had been using ethnic terms to mobilise.

“It is not about ethnic mobilisation. It's about many causes and we will talk about that later,” he said.

The eThekwini Metro has been the epicentre of rampant looting and burning of shopping malls and other business buildings such as warehouses.
News
1 year ago

The soldiers have already taken up positions in Alexandra and Vosloorus townships and around the ransacked shopping malls.
News
1 year ago

A relative, who asked that she and the deceased family member not be named, said her granny died at about 6.45am on Tuesday at her home in Protea ...
News
1 year ago

'A state of emergency will be counterproductive in defending our democracy.'
News
1 year ago
Next Article