A total of 12,500 soldiers are already in the streets of the hotspots of the recent civil unrest and rampant looting of shopping centres 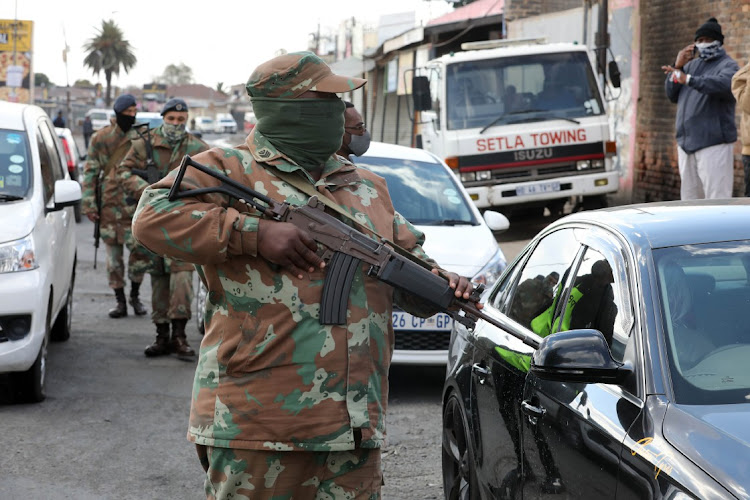 A total of 12,500 soldiers are already in the streets of the hotspots of the recent civil unrest and rampant looting of shopping centres.

The army deployment is part of a huge plan that will result in as many as 25,000 members by the SA National Defence Force hitting the street as part of “Operation Prosper” in KwaZulu-Natal and Gauteng. The operation will include the search for stolen property.

The soldiers have already taken up positions in Alexandra and Vosloorus townships and around the ransacked shopping malls.

There were mixed views from locals in Alexandra about the deployment of additional soldiers in an effort to quell the ongoing violent looting sprees. On Thursday, the soldiers were seen patrolling the streets of Alexandra, particularly about the Pan Africa Shopping Centre and Alexandra Plaza, where many stores were looted in the past few days.

They were also stationed at the Alex Mall while other vehicles ventured deeper into the township on patrol.

Refilwe Pieterse, 37, a community leader in Alexandra, was unhappy with the deployment of soldiers.

“This is something we are not used to. It is really not a comfortable feeling at all. However, I understand why they are here,” Pieterse said.

'It's not about Zuma ... They're having a party': Joburg resident shares tale of living above deadly riots

'This time is bad. We aren't safe to walk around the streets. Looters are even looting from each other,' a resident of Berea, Johannesburg, said.
News
1 year ago

“This is a good thing that they came here. We managed to get order and started cleaning up from 10am this morning,” Diseko said.

The defence ministry said it had already deployed 10,000 additional soldiers in Gauteng and KwaZulu-Natal in the past two days to assist the police in their efforts to restore peace and order.

Their mandate involves raids to recover some of the goods that had been stolen by the looters.

Defence spokesperson Siphiwe Dlamini said continued difficulty in managing looters and effectively supporting the police had resulted in the request for more soldiers.

“Our analysis, together with the police, dictated that we needed more enforcement. The numbers that we had planned for were too minimum and the police were still overstretched and overwhelmed even with the previous support, so we had to bring more men to work with them,” Dlamini said.

On Wednesday night, government gazetted a code of conduct for the SANDF stipulating that they would be empowered to work with the police to conduct roadblocks, cordons, searches and patrols, among their other mandates.

Police minister Bheki Cele  was in Phoenix, north of Durban, where racial tensions between the Zulu population and the Indian business community were heightened during the violent looting, which led to property destruction and loss of life.  Cele highlighted the plan to raid homes for stolen goods.

“It is going to be a very tough time in many houses and many homes about SA because we will want to come into your house and you must give us the receipt of the appliance, and if you don’t have the receipt, hard luck,” Cele said.

While more soldiers were expected to join the SA Police Service (SAPS) in the coming days, the SANDF and the defence ministry could not disclose intimate details of the posting of soldiers.

Asked if the SANDF would also take part in the household raids, Dlamini said the soldiers would rely on how the police planned to deal with the situation.

“Where the police are, the SANDF is there. This is a mission that is led by the SAPS, with a very strong support from the SANDF,” Dlamini said.

SA National Defence Union secretary Pikkie Greeff said the deployment of its members to guard civilians was unlikely to cause harm to civilians as they were under a strict mandate, despite extra powers.

Acting minister in the presidency Khumbudzo Ntshavheni said 208 incidents had been reported overnight: 52 in Gauteng and 156 in KwaZulu-Natal.
News
1 year ago

Alex FM has has been looted and has not been able to get on air.
News
1 year ago