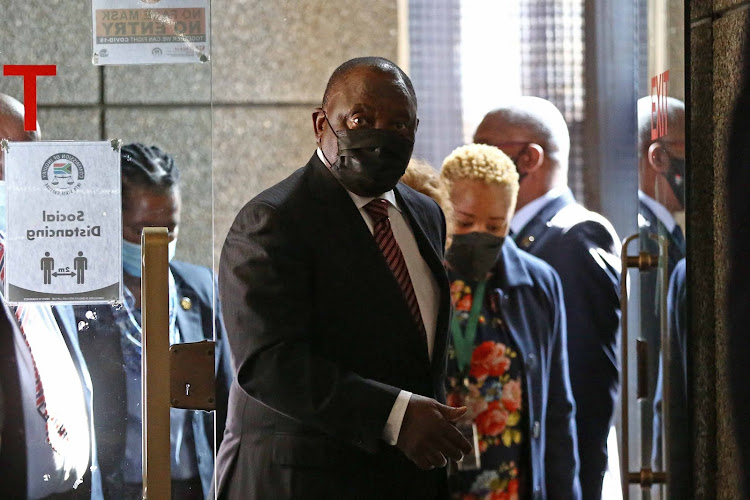 President Cyril Ramaphosa accompanied by his wife Dr Tshepo Motsepe as the president appears at the state capture commission to testify in his capacity as the president of the African National Congress
Image: Thapelo Morebudi/The Sunday Times.

President Cyril Ramaphosa is set to finally detail what he and the ANC knew and or did about allegations of state capture when he takes to the stand before the Judicial Commission of Inquiry into Allegations of State Capture on Wednesday morning.

Ramaphosa, who has been at the helm of the ANC since 2017, will be giving testimony before the inquiry as the political head of the governing party, whose leaders have been deeply implicated in the allegations of the looting of the state, including aiding the dubious business interest of the Guptas, who are the focal point of the commission’s probe.

Other members of the ANC team, including ANC head of policy Jeff Radebe and national executive committee (NEC) member Ronald Lamola, had already made their way into the commission venue before 9am ahead of Ramaphosa's much anticipated arrival.

A media contingent was also camped outside awaiting his arrival.

Ramaphosa is expected to detail the extent of his knowledge of the Gupta brothers, his interaction with them as well as the extent of their relationship with the ANC.

He is also expected to give details of his relationship with  controversial facilities management company Bosasa as well as its donation towards his ANC presidential campaign.

President Cyril Ramaphosa has arrived at the state capture inquiry.
News
1 year ago

Bosasa has been  implicated before the commission over allegations of bribing top politicians and officials with money and other gratifications in exchange for state contracts and political protection.

Ramaphosa had previously acknowledged in a stinging letter to the party’s membership in August last year that while the ANC might not stand alone in the dock, it did “stand as accused No 1”, and his much anticipated testimony is expected to expand on the remark, which received both rousing welcome and vocal rejection from the ANC’s rank and file.

Other issues Ramaphosa was expected to testify on was the ANC’s cadre deployment policy, which has been criticised  by the DA and other interests groups, including AfriForum, as having been an enabler for corruption as those deployed had pushed for party and corrupt interests instead of being dedicated to clean, public service.

While the ANC’s national chairperson Gwede Mantashe has already testified and defended the policy before the commission, Ramaphosa was expected to give more detail on how the policy and the deployment committee, which he chaired as the party’s deputy president from 2013 until late 2017, actually worked and answer on its alleged role in state capture.

President Cyril Ramaphosa will appear at the state capture inquiry on Wednesday.
News
1 year ago

President Cyril Ramaphosa has called on voters not to elect corrupt individuals in the forthcoming local government elections, adding that it’s the ...
News
1 year ago
Next Article