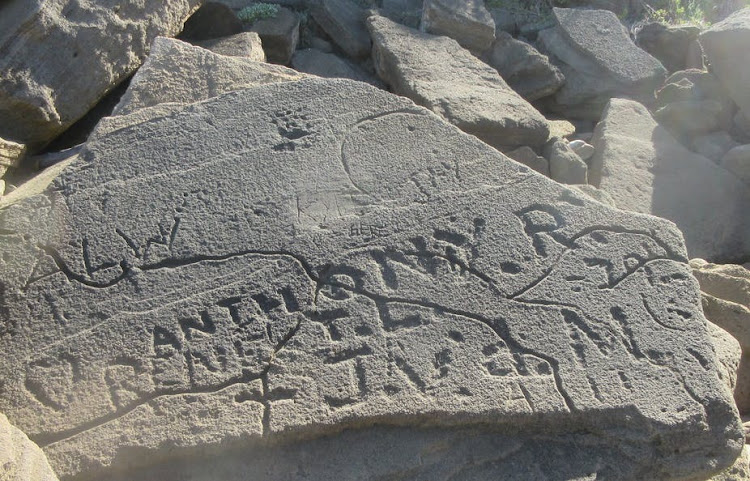 The rocky outcrops that dot much of SA’s coastline contain hidden treasure: the cemented remains of the dune and beach surfaces that existed hundreds of thousands of years ago.

These cemented remains, or aeolianites, and the tracksites they contain, provide a snapshot of the Pleistocene Epoch, which started around 2.6 million years ago and lasted until about 11,700 years ago.

During this time, what is today the Cape south coast looked very different. Our research team has found more than 300 vertebrate tracksites in these rock surfaces on a 350km stretch of this coast. The oldest surfaces are about 400,000 years old, and the youngest about 35,000 years old.

Some of these discoveries have had important palaeo-environmental implications. For example, the presence of giraffe in the region is only known through its tracks; this allows us to infer that at least part of the landscape was savannah woodland.

Breeding sea turtles and crocodiles are also known only through the tracks that they left. Their ancient presence suggests a warmer climate tens of thousands of years ago.

This period, and this area, was crucially important for humans, too. At a number of sites these rock surfaces provide evidence for where and how our ancestors walked, jogged, foraged, created images in sand, or used stone tools.

These surfaces are of profound scientific, cultural, heritage, environmental, and aesthetic importance. Unfortunately, they are threatened — by graffiti.

Their fairly soft, friable nature means that with nothing more than a hammer and a chisel, names and other images can be etched into them. That poses a tremendous risk to the underlying scientific information contained in these rocks’ surfaces.

Sadly, the amount of this type of graffiti appears to be increasing, as my colleagues and I from the African Centre for Coastal Palaeoscience at Nelson Mandela University outlined in a recent journal article.

That’s not to say it’s an entirely new phenomenon. One horrifying older example is from the West Coast National Park, about 120km outside Cape Town. Here hominin tracks that famously became known as ‘Eve’s footprints’ just missed being destroyed by graffiti. When researcher Dr Dave Roberts discovered the tracks in the 1990s, a graffiti artist had already been there, and had only narrowly avoided defacing the tracks.

The slab containing the tracks was airlifted to the Iziko Museum in Cape Town to secure them from further vandalism. 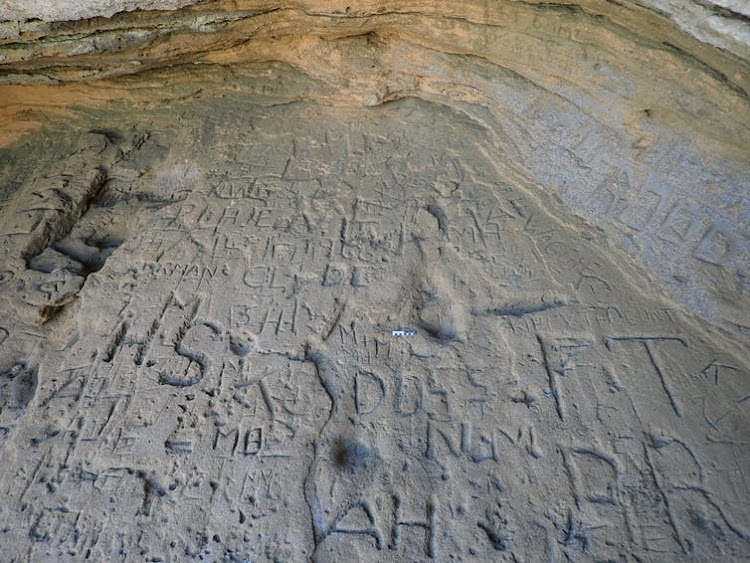 Graffiti on a cave floor west of Knysna. The underlying trackways, which may have been made by hominins, cannot be properly assessed.
Image: Charles Helm

However, as we noted in our paper, the outcome was not as fortunate at a small cave west of Knysna, a town on SA’s Garden Route.

Here a mass of graffiti adorns a sloping cave floor that was once a dune surface, obscuring what can be seen of underlying trackways. Tragically, there is evidence to suggest that these too may have been hominin tracks, but we cannot be certain.

The dune surfaces that our ancestors trod on became buried. Over time, they became cemented, and eventually became re-exposed on the coast. Yet today the descendants of those ancestral pioneers carve their initials into those surfaces without appreciating their globally significant heritage value.

Fossil tracksites seem to encourage the creative urge in the graffiti artist, as etched graffiti appears to occur more frequently on or beside such sites. So, how can this issue be tackled?

Education and general awareness are important in addressing the problem, and lessons can perhaps be learnt from the protection of rock art, which is also subject to defacement through graffiti.

Dozens of controversial tin shacks meant to accommodate people from overcrowded areas in Limpopo have become targets for criminals.
News
11 months ago

Signage at access points to areas of coastline may help, with catchphrases such as “Please don’t destroy in five minutes what took 120,000 years to form”.

Or perhaps non-track-bearing aeolianites (cemented dunes) can be placed at strategic access points, and people can be allowed to carve their names on these surfaces if they wish to.

Because many aeolianites occur in SA’s national parks and other protected areas, authorities like SANParks and CapeNature may be well placed to lead such initiatives.

These aeolianites are of critical international importance, and as a result of their heritage, scientific and aesthetic value, a powerful argument can be made for their protection.

Thinking of aeolianite surfaces as a kind of time capsule may help: these are the very same dune surfaces that our ancestors viewed and trod on when they were beginning to think and act like us.

Charles Helm is a research associate at the African Centre for Coastal Palaeoscience, Nelson Mandela University

This article is republished from The Conversation under a Creative Commons licence. Read the original article.