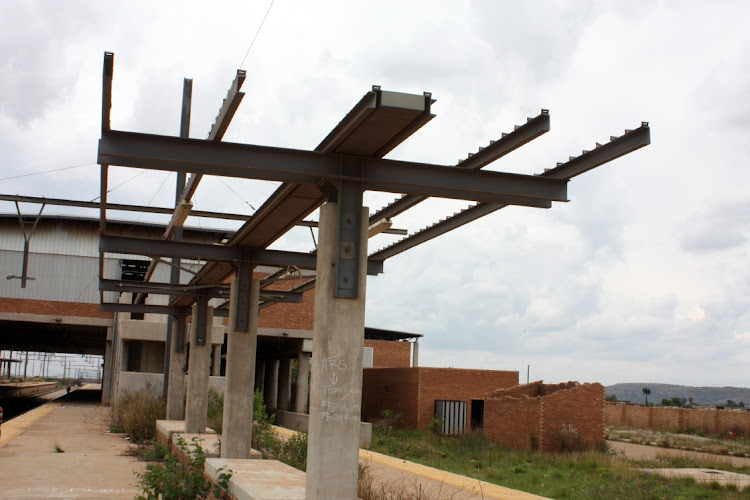 The pillaging of rail infrastructure continues unabated with the latest concern being raised in Phomolong informal settlement, east of Pretoria, where vandals have torn down a R102m Greenview train station.

The multimillion-rand train station, which was built in 2011, has been stripped bare and left falling apart in the hands of drug addicts.

When Sowetan visited the station last week, the structure had lost its roof, door frames and the aluminum  windows had been stolen, other fittings had been vandalised, the cables had been removed and the rail tracks uprooted. Drug addicts have turned the station into their haven, where they sleep day and night.

A community member, Pretty Mokgabudi, said it was painful to watch a project that cost so much money go into ruin.

"I'm so disappointed that this project has turned out this way because it would have helped the community, especially pupils, because the train is less expensive," said Mokgabudi.

The provincial government is considering taking over the running of trains and placing that responsibility to its newly formed entity, the Gauteng ...
News
1 year ago

Train commuter Nompumelelo Khumalo said before the lockdown she used to travel by train and saved money even though the Greenview station was not yet operational.

"I just want the station to open and operate because I spend so much money on taxis everyday while there is a train station here in our area not working. If they can open it it will save us a lot of money for transport because the train is cheaper," she said.

Another commuter, Lesego Makena, said his son was a scholar and had been buying  a monthly ticket for R160 per month, and since the lockdown had to travel by taxi, which is costly.

"I'm pleading with Passenger Rail Agency of SA (Prasa) to open the station so it can function and operate," said Makena.

The Greenview train station upgrade was part of Prasa's overall strategic objective of positioning passenger rail as the backbone for public transport.

Prasa's project manager of strategic infrastructure, Buhlebenkosi Maphosa, said the land matters that affected the completion of the station were being attended to and that negotiations were at an advanced stage. The construction of Greenview Station, which started in 2011, had so far cost over R102m.

"The project stopped in October 2018, after the then appointed contractor cited community unrest. The train has not been stopping at the Greenview station because the station is not complete. The occupation certificate has not been issued by City of Tshwane in this regard," said Maphosa.

He said the timeline for the completion of the project would be communicated once the land matters had been addressed and a contractor had been appointed.

The Passenger Rail Agency of SA (Prasa) on Friday said it had complied with the Railway Safety Regulator’s directive for train service Shosholoza ...
News
1 year ago

An unprecedented level of looting along Cape Town’s Metrorail central line will render commuter train services to the city's poorest communities ...
News
1 year ago
Next Article