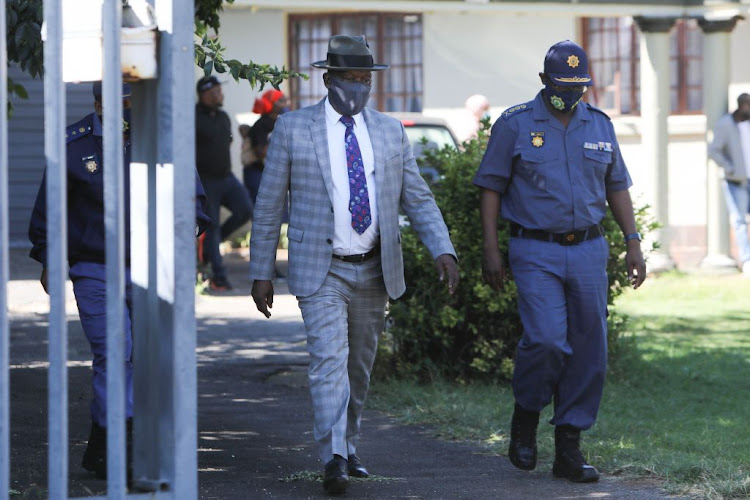 Police minister Bheki Cele leaves the family home of Mthokozisi Ntumba in Kempton Park on March 11 2021. Cele says a claim made by EFF leader Julius Malema that the police would pay for Ntumba's burial was false and misleading.
Image: Alaister Russell/The Sunday Times

Police minister Bheki Cele says he never discussed funeral arrangements with the family of Mthokozisi Ntumba during his visit to the family last week.

Ntumba, 35, was shot dead, allegedly by police, during a protest by students from the University of the Witwatersrand in Braamfontein, Johannesburg, last Wednesday.

Cele, who visited the family in Kempton Park the next day, has denied a statement made by EFF leader Julius Malema on Sunday suggesting that Cele had reneged on an alleged promise to the family regarding burial arrangements and payments.

Cele was responding to comments made by Malema, who after visiting the family on Sunday accused Cele of making empty promises to assist the family.

Cele said the claims were false and misleading.

Malema said on Sunday the family was not coping at all. “But what makes matters worse is that Bheki Cele came here and promised to help this family. But when they send them the things that they need, they are now being asked questions: 'Don't you have a funeral policy? Don't you have stokvel to contribute to your burial?'” Malema said.

The SA Union of Students in KwaZulu-Natal has called for higher education minister Blade Nzimande to be held accountable for the death of Mthokozisi ...
News
1 year ago

Malema said Cele made a commitment and when he left the family, he gave them a contact person to communicate with.

“Now the contact is asking them all types of things, which is unnecessary,” Malema said.

However, Cele denied ever making any promises to pay. “Neither did the family at this early stage in their bereavement express specific financial needs to the minister,” Cele's spokesperson Lirandzu Themba said on Monday.

Themba said the purpose of Cele's visit was to pay condolences to the family and to demonstrate a commitment towards swift action and accountability after Ntumba's killing.

Themba said the Ntumba family received Cele well and also expressed their appreciation for the government’s commitment to finding justice.

She said Cele urged the family to get in touch with him on his cellphone number, as well as the number of Themba, if the family experienced any difficulties in the investigations of the case.

“There has not been a call from the family to this effect. It is important to note that at no point did minister Cele discuss funeral arrangements with the family during his visit or subsequently.”

Cele said it was a heartless move by any political party to lie by using the pain of a family  to push a political agenda in a desperate attempt to gain political mileage.

Four police officers have been arrested in connection with the killing of Mthokozisi Ntumba during a student protest.
News
1 year ago

The City of Johannesburg says it will not express any view on whether the municipality would support the renaming of De Beer Street in Braamfontein ...
News
1 year ago
Next Article