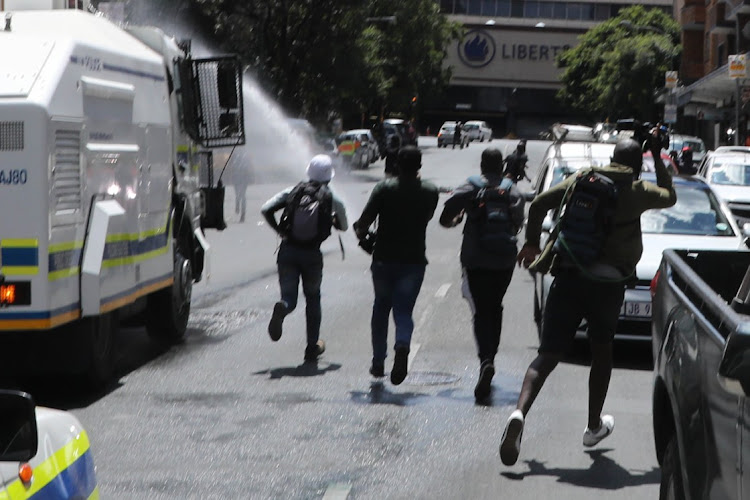 Protesting students on Monday closed roads in Braamfontein as part of the national shutdown over financial exclusion.
Image: ANTONIO MUCHAVE

The first day of the national shutdown of higher education institutions by students across the country got off to a rocky start in Braamfontein as police used water cannons to disperse students who had been blocking traffic and forcing shops to close.

Since 11am, students from various institutions had been going around Braamfontein, blocking streets with rocks and throwing garbage in the streets. The students also tried to force Rosebank College along Jorissen Street to close but did not succeed.

Security at the college rushed to stop protesting students and closed the gates.

For about two hours, the students continued to sing and chant on the streets, calling others to join in.

As the group reached the corner of Stiemens and De Beer streets, not far from where Mthokozisi Ntumba was killed, police came in numbers and used water cannons to disperse the students.

The police were called in to disperse a group of protesting students who set tyres alight outside the University of Zululand, in northern ...
News
1 year ago

Student scattered on the streets and the police continued to chase them. In anger, some of the students regrouped and and started throwing bricks in the direction of the police.

This was first time that the EFF Student Command and the SA Student Congress had marched together since the killing of Ntumba on March 10. On the day of Ntumba’s death, the two organisations had disagreements after ANC T-shirts were brought for the students during the march.

Mfeka said students have decided to come out as they see the shutdown as a movement that cuts across political lines.

“We decided to unite because the cause is bigger. We understand that this is beyond us,” he said.

He lashed out at the police for their use of force.

“It is a form of police brutality which a few media houses picked up…Police should come and speak to us first. They must tell us which law we have broken, the reason why they are firing these water cannons and rubber bullets, because there is no law that we have broken,” Mfeka said.

Students have since regrouped and are continuing with the protests.

Students took to the streets of Johannesburg early on Monday to continue their protests about fees as 26 universities across SA braced for a national ...
News
1 year ago

A group of students have clashed with security guards at the Central Johannesburg College campus in Parktown on Monday.
News
1 year ago
Next Article