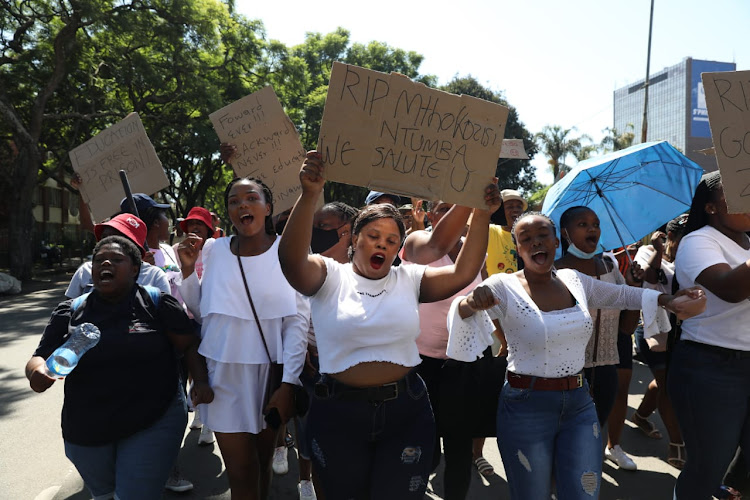 Students have vowed to continue protests until their demands have been met.
Image: Sandile Ndlovu

The SA Union of Students (SAUS) in KwaZulu-Natal has called for higher education minister Blade Nzimande to be held accountable for the death of Mthokozisi Ntumba.

His death sent shockwaves across the country, with police minister Bheki Cele coming under fire and the public accusing the police of negligence. Police watchdog the Independent Police Investigative Directorate is investigating the death.

On Monday, the union representing all university student representative councils (SRCs) at public universities joined the national mass protest action, calling for students with outstanding debts to be allowed to register.

SAUS’s Sinenhlanhla Nyaniso led hundreds of students to the provincial legislature in Pietermaritzburg to voice their grievances.

The City of Johannesburg says it will not express any view on whether the municipality would support the renaming of De Beer Street in Braamfontein ...
News
1 year ago

SAUS said Nzimande should not be allowed to “get off the hook” for the killing of the father of four.

“Nzimande is the cause of the death. If the department had been prepared and there were no financial exclusions of those with historical debt and there was funding for first-year students, there would have been no protests,” said Nyaniso.

Nyaniso said Nzimande must be “grilled”.

“Police exert so much brutality on unarmed students protesting to go to study. They are unreasonably aggressive and while Cele is at the centre of it as police minister, Nzimande must also be asked questions for his role in what set off the protests,” she said.

The students are calling for:

The students vowed to “continue the shutdown” until their demands are met.

The police were called in to disperse a group of protesting students who set tyres alight outside the University of Zululand, in northern ...
News
1 year ago

Students took to the streets of Johannesburg early on Monday to continue their protests about fees as 26 universities across SA braced for a national ...
News
1 year ago

Department has no money to pay students' debt with varsities, says Nzimande

Minister of higher education Blade Nzimande says his department does not have money to support tertiary institutions to clear all students’ ...
News
1 year ago
Next Article