‘How do you answer that?’ asks cousin about explaining Mthokozisi Ntumba's death to his children

His death was ‘not supposed to happen’ 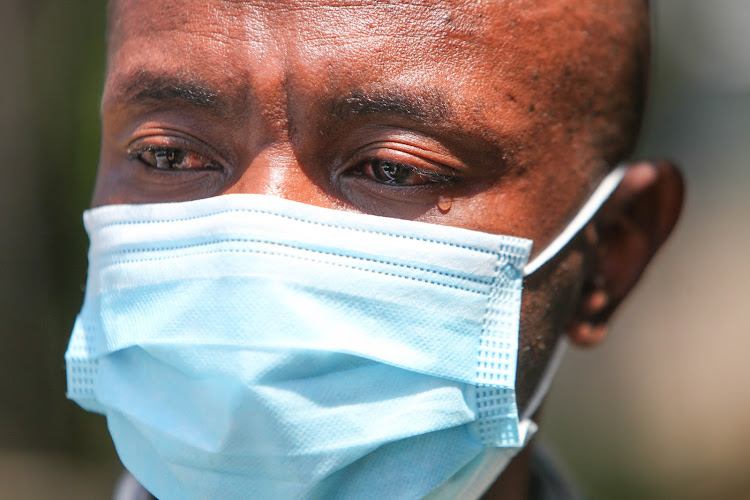 The man, a bystander who was shot by police amid student protests in Braamfontein this week, worked hard for his family and to ensure his children would not struggle to receive education.

However, his heartbroken cousin says what happened to him on Wednesday means this dream could be cut short.

On Friday, tears welled in Sthembiso Jwara’s eyes as he battled to say who would take over caring for Ntumba’s wife and four children.

Ntumba’s youngest child, who was seen being carried in the family yard by another relative, is eight months old.

“We are Africans. They are our children. But we all know the reality of life and the time we are living in. Everyone is stretched so it will definitely be a huge burden because he [Ntumba] was responsible and taking care of his family. There is a big gap now. His children are still very young, and I imagine his wife and what she will be going through,” Jwara said.

The 35-year-old Ntumba, who was a town planner for the City of Tshwane, was the main provider for his family.

Originally from Bergville in KwaZulu-Natal, Ntumba had secured a National Student Financial Aid Scheme (NSFAS) bursary to enrol at the University of Johannesburg in 2007 — opening doors for a better life for himself and his family back home.

On Tuesday, as he stepped out of his doctor’s offices, Ntumba was confronted by public order police who had been deployed to the University of Witwatersrand, where students had been protesting against the financial exclusion of those with historical debt, and fighting for first-year students who did not know how their tuition will be financed.

Ntumba was shot, apparently at close range, with several rubber bullets by a police officer. He died moments later.

Jwara told TimesLIVE Ntumba was continuously trying to develop himself. He had recently obtained a master's degree in management of technology and innovation from the Da Vinci Institute School of Business Leadership.

“He struggled financially through varsity. He sometimes did not have enough money to do certain things, but we got by with the little we had,” said Sithole.

He agreed Ntumba was focused on self-improvement.

“He always stressed that he needed to get his family out of poverty, and that is why he worked so hard. Most were not from wealthy backgrounds at all but he managed to change his family situation,” Sithole said.

Police minister Bheki Cele is visiting the family of Mthokozisi Ntumba, the 35-year-old man who was gunned down by police during a protest by Wits ...
News
1 year ago

Jwara said student funding had made a difference in a lot of young people’s lives, including Ntumba’s, but it was a pity how in this case its fruits would no longer be enjoyed as his children face a life of uncertainty without their breadwinner.

Sithole found out about his friend’s death while listening to a news report on Radio 702. This after a video shared on social media showed Ntumba gasping for air on the pavements with bloodstains on his blue shirt and blood on his face after being shot by the police officer.

His death elicited outrage, with the police criticised by some for using excessive force when dispersing black protesters as opposed to white protesters.

On Thursday, a day after Ntumba’s death, police minister Bheki Cele visited his home in Kempton Park in Ekurhuleni, Johannesburg, where he was welcomed by Ntumba’s widow and the rest of his family.

“The visit from the minister seemed like there is some owning up to what has happened. He has indicated there is an investigation that is not being handled by the police. He said they would take the findings of the investigation as they are. They will not oppose anything,” Jwara said.

There has to be accountability and justice that comes with it because this was not supposed to happen. It doesn’t matter which angle you look at it from.

After meeting the family on Thursday, Cele said the allegations that police were more heavy-handed when it came to protests involving black people was slowly becoming more “difficult to defend”.

“That question has been coming and it has been slowly becoming very difficult to defend it,” he said. “I can’t explain it. It’s something that has no grain of explanation and defence for it. Somebody just went crazy.”

Jwara admitted there was a lot of anger over how police handled themselves.

“It’s an incident that was not supposed to happen. Our brother was innocent and the protest we feel did not warrant aggressive force from the police, nor the incident that took Mthokozisi.

“There has to be accountability and justice that comes with it because this was not supposed to happen. It doesn’t matter which angle you look at it from. Yes, there is a lot of anger,” he said.

Over the years, several incidents in which the police are alleged to have used excessive force have resulted in deaths. Not all the cases, however, resulted in officers being jailed.

Asked whether they had hope someone would be held to account for Ntumba’s death, Jwara sighed.

“It is difficult to answer. We want to have hope and so far the report we have received gives us hope there will be justice. Of course we will not sit and fold our hands. We will pursue justice as well.”

As more details emerge of the shooting of a man in Braamfontein on Wednesday, one thing is clear – the police killed Mthokozisi Ntumba in cold blood.
Opinion
1 year ago

The family had a message for the police.

“The police should think of life. The police force is a very formalised service and structure with strict and specific protocols, and strict commands and guidelines on how to deal with situations. People need to follow the protocols that are there. If they don’t follow protocols, they should know they are causing harm to more than one person.

“They are causing harm to families, to the nation and the future generation because what Mthokozisi was going to do to support his family and the generation that would have followed after has been cut short.

“We lost the life of an exemplary man. They must respect life and follow protocols. It is reckless what we are seeing and this is not the first case. We hope Mthokozisi’s case will be dealt with.

“We would love to see proper accountability and that this stops. If it is not dealt with, more people are going to die. It’s not only death but some people will be scarred for life,” he said.

Jwara said one of the most difficult things would to one day answer questions from Ntumba’s children about what happened to their father.

“How do you answer that?” Jwara said, wiping tears from his eyes.

“The police are a protection service. If there are killers in that service, including in the leadership, it has to be dealt with.”