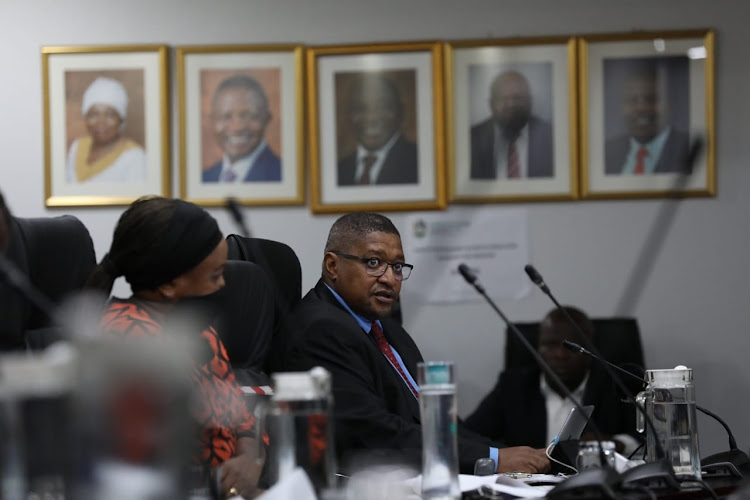 Electoral Commission chairperson Glen Mashinini admitted the IEC could not guarantee that personal information contained in the voters' roll would not be abused. File photo.
Image: Sandile Ndlovu

The Electoral Commission of SA (IEC) has moved to allay fears about invasions of voters’ privacy brought about by amendments to the Electoral Laws Amendment Bill.

However, it could not guarantee voters’ information would not be abused.

This came up during the home affairs portfolio committee meeting on Tuesday when the commission was discussing amendments to the bill, which has been sent back to the National Assembly by the National Council of Provinces (NCOP), citing fears of possible invasion of privacy.

The bill provides for the sharing of the voters’ roll with political parties, independent candidates and other interested parties. But MPs have raised fears that information contained in the roll, which includes ID numbers and physical addresses, posed a threat to the privacy of voters.

Addressing the committee, IEC deputy CEO Masego Sheburi gave assurances that the new changes to the bill would be sufficient.

EFF vote for postponement, DA says delay will be illegal
News
1 year ago

He said having considered submissions following the NCOP process, the IEC found there was no legal defensible basis to withhold copies of the voters’ roll.

“The commission in the circumstances concluded it would make copies of the voters’ roll available but that will be subject to the requirements for the lawful processing of personal information act,” said Sheburi.

He said the commission was under a lawful obligation to provide the voters’ roll, but in so doing it should ensure the roll is provided only for explicit and specifically defined lawful purposes.

“Access to the voters’ roll is no longer absolute but it cannot be any person who has access to the roll. Access, if this version is accepted, must be linked to a prescribed purpose and there are three broad purposes.

He said as part of safeguarding the information, ID numbers of voters will be partly redacted, only showing the first six digits which indicate the date of birth.

Sheburi further stated that anyone who uses information provided to them for purposes other than what they had stated to the IEC would be criminally charged.

How will the IEC ensure an institution or an individual who is asking for the voters’ roll is not going to use that information for rogue activities?

“How will the IEC ensure an institution or an individual who is asking for the voters’ roll is not going to use that information for rogue activities? As we know with the leader of the EFF, they have compromised his security. They located his address and they pinned it all over the news for any criminals to know where his home is.

“I would like to know from the IEC if I ask for the voters’ roll and they grant it to me, how will they monitor that very closely?” said Tshwaku.

Van der Merwe said: “We welcome the fact that the voters’ roll will, in some instances, be made available to members of the media and civil society for them to be able to play their oversight role. The IFP welcomes that because it is something we wanted from the start.

“But when we speak about the element of monitoring and the fine elements, how possible or how feasible will it be for the IEC to monitor that? I imagine by the time somebody has already abused my personal details for commercial gain or other unlawful activities, it would be too late to undo that.”

Both IEC chairperson Glen Mashinini and CEO Sy Mamabolo admitted they could not guarantee personal information would not be abused but could only act after the fact.

“I cannot be sure that in every single case when a request is made, there won't be any malfeasance. I can’t give that guarantee,” said Mamabolo.