Wounded father, in hospital for surgery, does not know his son died 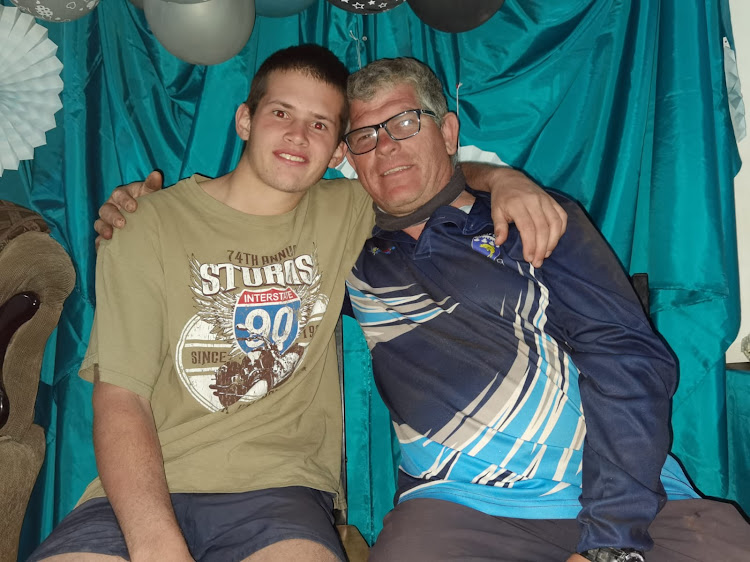 Nathan and his father Johan Hebler were shot outside Slap Chips in Vanderbijlpark this week. Nathan died after the attack.
Image: Supplied by family

Nathan Hebler lay covered in blood, a few metres from his father near a fast food outlet at Vanderbijlpark in the Vaal Triangle on Tuesday evening. The two had just been shot by a gunman who had gone on a shooting spree.

Moments after being shot, Johan, who was still conscious, called his wife Catherina to come to their aid.

“Johan and Nathan were inside Slap Chips [restaurant] when they heard a bakkie crash into a car outside. They ran out and that’s when the guy opened fire,” Nathan’s niece Bianca Venter told TimesLIVE on Friday.

Venter said when Catherina arrived on the scene, Johan was lying close to the drive-through at McDonald's in Frikkie Meyer Boulevard, while Nathan was lying a few metres away, close to a butchery.

“Johan was still fine when his wife arrived because he was the one who phoned her and told her what happened. Nathan was also conscious and could speak.”

Before being transported to hospital, Nathan looked his mother in the eyes and told her: “I love you mom.”

“Please be strong, boeta,” Catherina responded before her son and husband were rushed to a hospital in Emfuleni.

Nathan was a dreamer, a gentle soul with a heart of gold.

Nathan died in hospital that same evening, while his father survived.

The second man had since been identified as 47-year-old car guard Willem Kriel.

Paramedics said Kriel was shot in the head.

According to Sowetan, car guard Siyabonga Mvo said he was standing in the parking lot with a manager of a shop when a BMW X5 came speeding their way.

Mvo told the paper he managed to move out of the way, but the manager was hit by the car and flung against a wall.

It was reported that both of manager Lewis Lawrence Townsen’s legs were broken and he was also taken to hospital.

Gauteng police said the gunman later drove to a petrol station in Sharpeville, where he turned the gun on himself.

He still does not know that his son succumbed to his wounds.

“No words can describe Nathan. He was an awesome child and loved kids, especially babies. He was such a gentle soul, with a heart of gold, and always cared for others.

“Nathan was a dreamer and couldn’t wait to finish school to go work on farms in America. He was a hard-working young man and was so excited when he got his first car. He wanted to show it off to everyone.

“Nathan had good values and was a good sportsman. He excelled in rugby and athletics. I can write a book about him. We will miss him dearly.”

Man goes on shooting spree before turning gun on himself

An unknown assailant shot himself last night at a petrol station in Sharpeville, in the Vaal, after going on a rampage that killed and injured a ...
News
1 year ago

Two of the people shot in Vanderbijlpark in the Vaal Triangle have died, Gauteng police confirmed on Wednesday afternoon.
News
1 year ago
Next Article