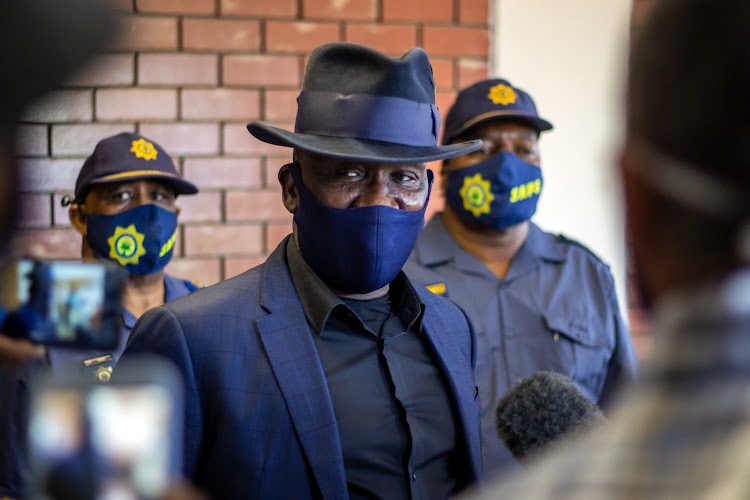 Police minister Bheki Cele has conceded that SAPS management "dropped the ball" in its treatment of Sassa grant applicants who were sprayed with a water cannon in Cape Town.

He said this incident, compared to the treatment of protesters who defied the beach ban on Saturday, led to perceptions that officers in the Western Cape behaved like "apartheid police".

Cele said on Wednesday that he had spoken to station commanders from across the province about public perceptions of them being selective in their stance towards certain communities. Police managers were reminded of their constitutional and legislative mandate, he added.

“That was a perception, whether right or wrong, but things happened which really do look like they are leading to this kind of perception.

A group of Durban surfers defied the government's beach ban by taking to the water to protest against restrictions on Wednesday.
News
1 year ago

“Then you have people going to the beach for leisure, who sit down and decide that we are going to break the law, and you become very circumstantial around them, saying that people were going to get hurt [if the police intervened].

“On this one we really dropped the ball - we did what we are not supposed to do. We are here to try to correct that.”

Cele was speaking at Khayelitsha police station at the start of a day of inspections at three police stations including Gugulethu and Harare after weekend shooting incidents that left several people dead.

He said two people were killed in a suspected retaliation attack in Cape Town after a shooting in Khayelitsha where six people were murdered in a shack on Saturday night.

The stations lie in the heart of communities besieged by violent extortionists collecting money from local and foreign business owners and who are alleged to be behind several murders, including a massacre in Gugulethu in November in which eight people were killed.

“There is a suspicion that the second shooting was in retaliation to the first shooting. Nobody has been arrested yet, but we are not very far from the people that we are pursuing here,” he said.

He said an arrest had been made in relation to a gang shooting in Ravensmead on Friday where three people were killed, including two 16-year-olds.

He said two more arrests were expected for that shooting. He said police information indicated that the 16-year-old victims were “good, innocent, young people”.

“It looks like they were in the wrong place at the wrong time,” he said.

He also spoke about a police officer being shot while in pursuit of suspects.

“We have had quite a bad month here in the Western Cape and we had to come down here to deal with matters and see how far can we go in terms of reassuring the police,” he said.

You sit back and you wonder why this person got bail.

A night before Cele’s visit, the alleged leader of the 27s gang, William “Red” Steven, was murdered outside his house in Kraaifontein.

“You know we have arrested the top of these gangsters here, unfortunately there were three and one of them has been eliminated. When you are known to be a gangster and you get your repeated bails and all of that, those are the things we have to talk about,” said Cele.

Cele wanted to call on the justice cluster to “close the loopholes” that allowed criminals  to run their activities from inside correctional services facilities and for prosecutors and the judiciary to consider bail applications more carefully.

Steven was out on bail along with alleged underworld figures Mark Lifman and Jerome “Donkie” Booysen after they were arrested in connection with the murder of “Steroid King” Brian Wainstein, and extortion charges.

“You sit back and you wonder why this person got bail. If he was in custody, he would have been safer. It gives those people the opportunity who want to take the law into their own hands,” said Cele.

The department of social development is still awaiting a report explaining what took place when police used a water cannon against vulnerable social ...
News
1 year ago

Social development minister Lindiwe Zulu has told parliament she was the one who stopped the water-bombing of queuing SA Social Security Agency ...
News
1 year ago
Next Article