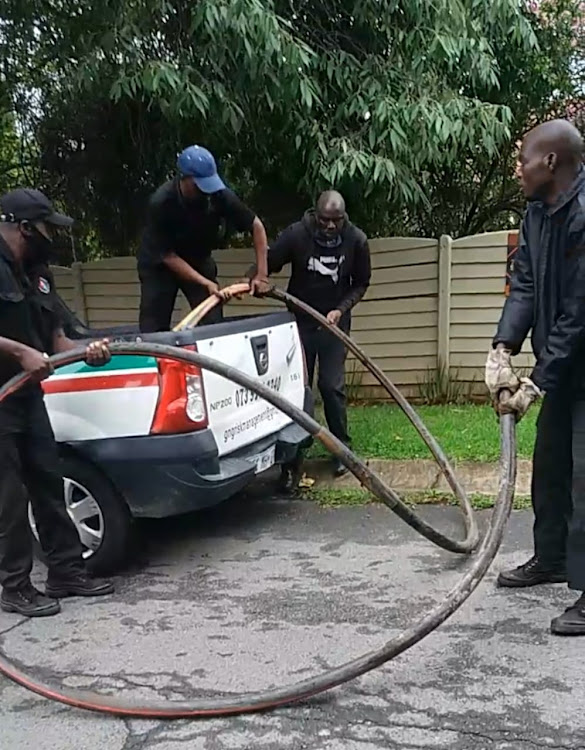 City Power officials remove its cables which were found at a house in Lombardy. Police want to speak to the owner of the house, who was not available during the visit on Saturday.
Image: Supplied

Police want to question the owner of a house in Lombardy,  northern Johannesburg, where City Power cables worth thousands of rand were found at the weekend.

City Power said the house was raided after its security division received a tip-off from members of the community about bundles of new and used electricity cables and suspicious activity at the house.

City Power spokesperson Isaac Mangena said both their security and police responded to the call and found the house was rented out to school pupils.

When they visited the house on Friday, they found the gates locked but could see the cables strewn in the driveway.

Police entered the yard on Saturday morning and removed a 50-metre underground core copper cable and about 15 metres of pole-to-ground copper cable.

It was established that the premises were rented to school pupils and the owner of the property was not on the premises. His identity has not been established.

City Power said the area of Lombardy, which includes Alexandra and Bramley, has in recent days experienced several outages due to cable theft.

Mangena said it was not clear where the recovered cables where stolen, and that City Power security was investigating.

The Red Location Museum in New Brighton, built to honour anti-apartheid heroes, but closed by residents since 2013, may soon be reopened. But the ...
News
1 year ago
Next Article