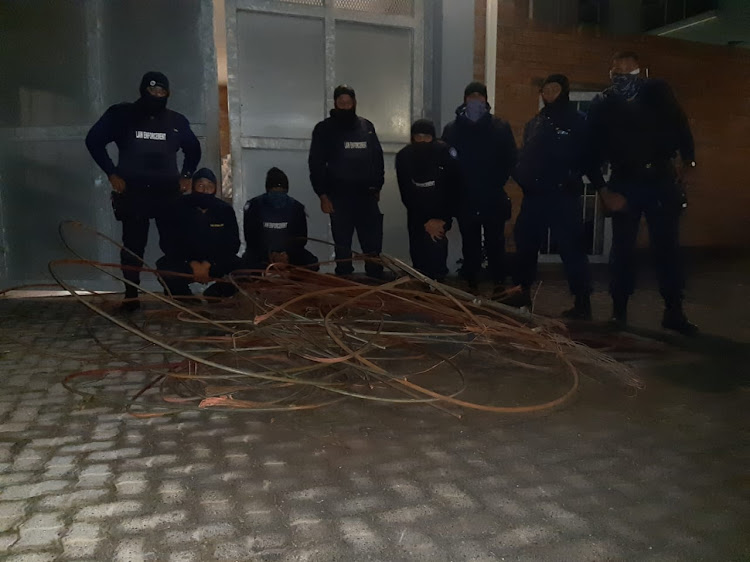 Some of the 250m of electric cable recovered by Cape Town law-enforcement members.
Image: City of Cape Town Law Enforcement

The Passenger Rail Agency of South Africa (Prasa) lost R364m in 2019 through looting of its infrastructure and burning of trains along 22,000km of tracks targeted by criminals.

But this week authorities struck back at cable thieves in Pretoria and Cape Town when several suspects were arrested for stealing millions of rands worth of cables.

Prasa's business intelligence unit and police on Wednesday arrested a Pretoria scrap dealership owner and two other suspects for possession of R10m worth of infrastructure, including overhead cables and rail equipment.

They made the arrests after intelligence surveillance and monitoring of the scrapyard in Mmakau, Garankuwa, in the North West, indicated that there may have been stolen goods on the premises.

Prasa spokesperson Nana Zenani said the organisation lost R364m in 2019 from vandalism of power stations, trains being set on fire in the Western Cape and Gauteng, and cable theft.

Prasa was placed under administration in December 2019 after years of trouble at the passenger rail operator, including the destruction of more than half of Cape Town’s passenger train fleet in arson attacks since 2015.

By the second half of 2019, Prasa suspended travel along its central line, once its busiest corridor, providing affordable public transport to Cape Town’s most densely populated and poorest communities in Khayelitsha and Mitchells Plain.

Long stretches of the central line lay in ruin with pylons stripped of all cables in the gang-plagued suburbs of Bonteheuwel, Heideveld and Manenberg.

Police in the North West arrested two people after aluminium cables worth R10m belonging to Prasa were found at a scrapyard in Mmakau on Monday.
News
1 year ago

City law-enforcement spokesperson Wayne Dyason said the suspects were arrested when they could not explain why they were in possession of the property.

On the same day, law enforcement officers in Bishop Lavis stopped three males cutting cable on the railway line. Dyason said they tried to flee but were quickly caught and arrested. He said 250m of overhead copper cable was recovered.

The three suspects, aged 30, 38, and 28, were processed at Bishop Lavis police station.

The busts follow another by Prasa business intelligence personnel in February at a house in Ratanda, Heidelberg, where R2m worth of infrastructure was recovered, leading to the arrest of three Prasa employees allegedly working with illicit scrap dealers.

Prasa administrator Bongisizwe Mpondo said that the authority had spent an immense amount of time and money repairing and securing infrastructure, which could have been used for upgrades to the passenger rail service.

“Passenger rail is the only affordable public transportation system with the ability to move a large number of South Africans,” said Mpondo.

“This means, by design, that Prasa’s main mandate from government is focused on operating passenger rail. The rise in unprecedented levels of vandalism of our infrastructure, along with the evident growth in the illicit trading of copper and steel on the black market, means Prasa must refocus its efforts towards providing more security manpower - using the same amount of money meant for passenger rail improvement  upgrades, without any additional revenue or funding,” said Mpondo.

He said Prasa was overstretched trying to plan the resumption of services following the Covid-19 closure of railway lines - due to the plundering along its 22,000km of railway lines and 370 stations - while committing to upgrading its service.

He pleaded with communities to be vigilant and report vandalism.

Police in the North West arrested two people after aluminium cables worth R10m belonging to Prasa were found at a scrapyard in Mmakau on Monday.
News
1 year ago

Transport minister Fikile Mbalula has delayed the resumption of train services in Gauteng and the rest of the country saying Prasa is not ready to ...
News
1 year ago
Next Article