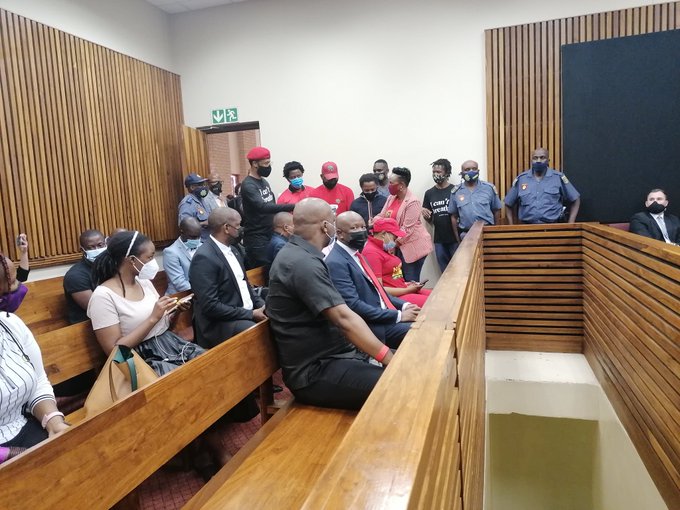 EFF leader Julius Malema and MP Mbuyiseni Ndlozi say the charge of common assault they are facing is part of a political agenda.

Malema and Ndlozi are standing trial at the Randburg magistrate's court, where they each face a charge of common assault.

They are accused of assaulting policeman Johannes Jacobus Venter in 2018 at the funeral of struggle stalwart Winnie Madikizela-Mandela in Fourways.

There was a large police contingent and a number of EFF marshals controlling traffic outside the court. On Wednesday Malema and Ndlozi pleaded not guilty to the charge.

Their lawyer, advocate Laurence Hodes, said Malema and Ndlozi believed they were entitled to enter the cemetery for Madikizela-Mandela's burial and that their obstruction was illegal.

“They believe there is a political agenda. They have tried to reach out to the complainant as a token of ubuntu but it was rejected,” Hodes said.

The trial continues, with Venter taking the witness box.

Julius Malema and Mbuyiseni Ndlozi appeared again at the Randburg magistrate's court on October 28 2020. The pair face assault charges relating to an incident that took place at the funeral of struggle stalwart Winnie Madikizela-Mandela in 2018.

#EFF Julius Malema and Mbuyiseni Ndlozi have just arrived at the Randburg Magistrate's Court where their trial is set to take place. @TimesLIVE pic.twitter.com/KUq2IIn1rm

EFF leader Julius Malema has called on businesses to make sure at least 60% of their staff are South Africans.
News
1 year ago

Black people are reaching a limit of tolerance for unrepentant racists.
Opinion
1 year ago
Next Article