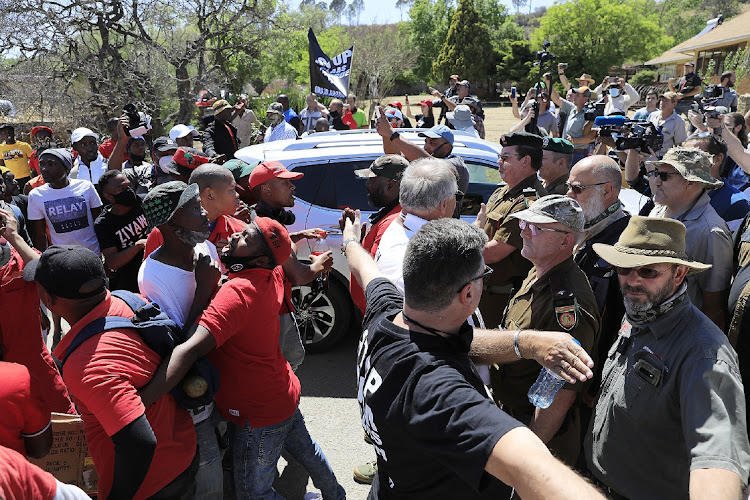 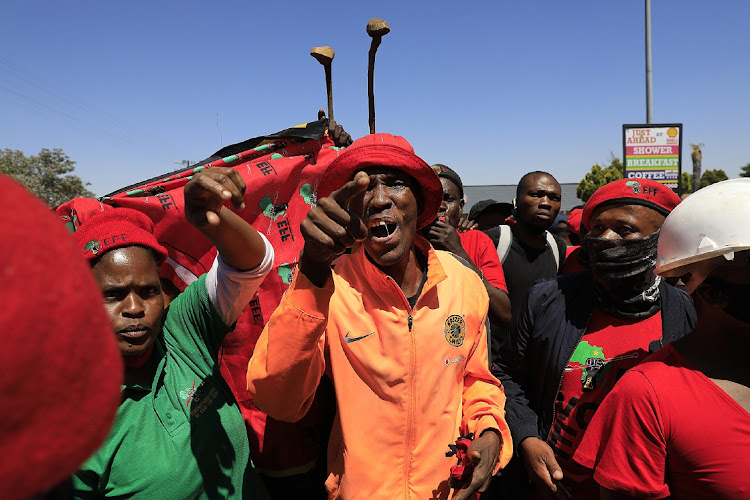 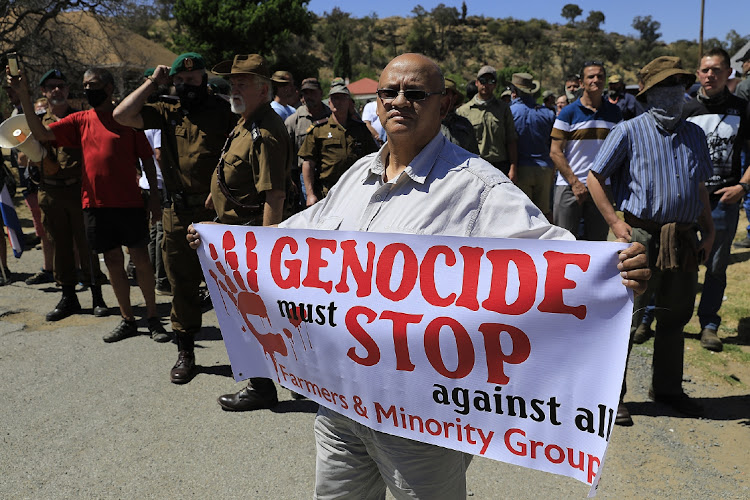 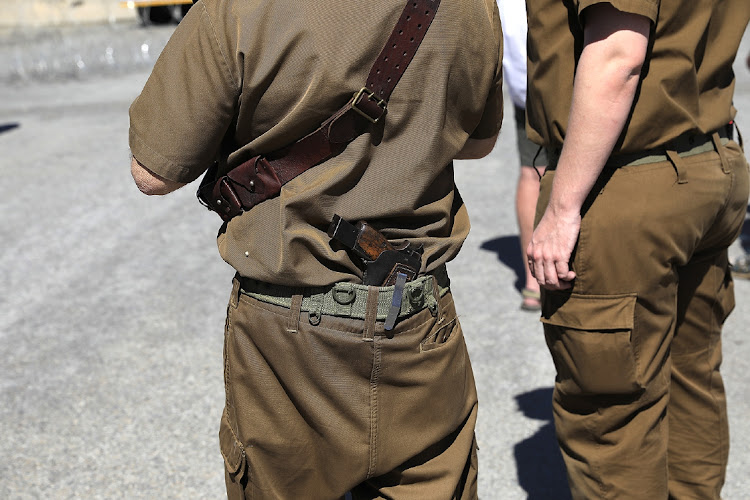 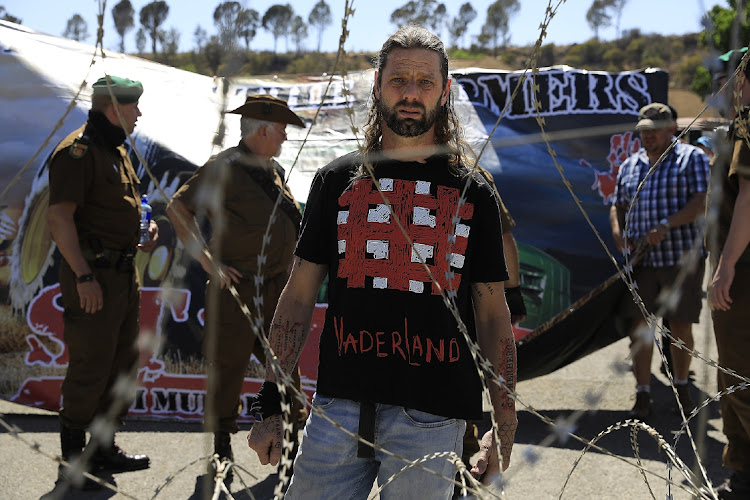 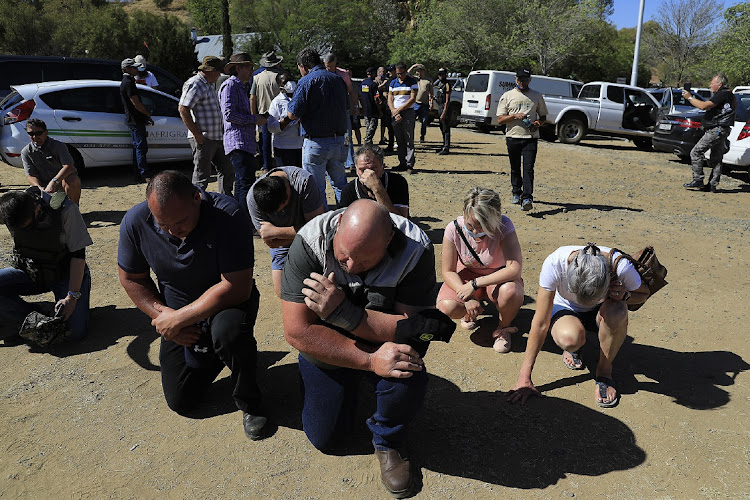 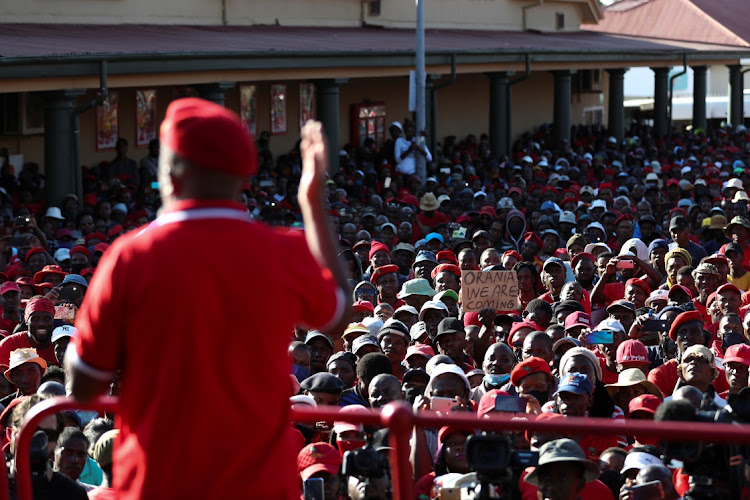 Farmers and EFF protesters hurled abuse and threats at each other on Friday during an emotion-charged  court hearing in Senekal that has exposed simmering racial tensions 26 years after the end of apartheid.

The young farm manager’s battered  body was found tied to a pole on the farm where he worked in a neighbouring town, sparking fury among the farming community, many of whose members were in Senekal on Friday during a tense standoff with hundreds of EFF supporters.

While the rival groups squared off outside the small court building, suspects Sekwetje Isaiah Mahlamba and Sekola Piet Matlaletsa applied for bail, and indicated they intended to plead not guilty to the murder and robbery of Horner.

Captain Gerhardus Myburgh‚ who testified in the two suspects’ bail bid‚ said Horner’s body had been found on October 2 on the Free State farm where he worked.

Myburgh said Horner’s body had been found tied to a fence post and a noose was about his neck.

He also had bad facial injures.

“During the postmortem it was found he had stab wounds on his head‚ shoulder‚ arm and hands.

“The postmortem concluded all the injuries were sustained during the same attack.

“The cause of death was strangulation‚” Myburgh told the court.

“He also had abrasion marks on his right thigh, which indicated he was dragged on the gravel road‚” he said.

EFF supporters and farmers gathered in Senekal on Friday as two men alleged to have killed farm manager Brendin Horner appeared in the town's ...
News
1 year ago

Mahlamba, 32, had earlier taken to the stand and told the court he had no idea how he had been linked to Horner’s murder.

He told the court that on the night Horner was killed he, Mahlamba, had spent the entire evening in the company of his girlfriend.

The bloodstained clothes which were found in his home, he said, had been soiled when he slaughtered a sheep during a traditional ceremony in September.

Co-accused Matlaletsa, 44, opted not to take to the stand.

Instead, he pleaded his case through an affidavit in which he decided not to touch on the merits of the case.

He said he intended to plead not guilty.

Farmers outside the courthouse accused the government of failing to protect them from violent crime, while the EFF members present had heeded firebrand leader Julius Malema’s call to come out in “defence” of democracy and public property.

This was after protests against farm killings during the suspects’ initial appearance earlier last week ended with a police van being tipped over and burnt.

“We are getting tired now of all the farm murders,” Geoffrey Marais, 30, a livestock trader from Delmas, where a woman was strangled to death two weeks ago, said.

“They [the government] must start to prioritise these crimes.”

Police separated the two groups with razor wire in one street and despite the noisy standoff there was no violence.

“There have been indications of tensions but by and large all of them [rival groups] took a decision that they did not want to see violence.

“That is a good thing,” state security minister Ayanda Dlodlo said outside the court.

Road blocks and tight security encompassed Senekal, in the Free State, on Friday before the appearance of two men alleged to have killed farm manager ...
News
1 year ago

The farmers mostly wore khaki shirts and shorts, but a few were in military outfits and at least one was armed.

The EFF supporters were mostly dressed in their trademark red shirts and berets.

After the court case, Malema addressed supporters, thanking them for coming out to stand “toe-to-toe with racists and white terrorists who think they can use the small town to show a middle finger to the whole country”.

“We said to them, unlike those who negotiated with you at Codesa, we will not allow you to show your white supremacy tendencies while we are here.”

Malema also said that white South Africans who loved their country were not the enemy as long as they accepted they were visitors and acted accordingly.

Earlier on Friday, a man was arrested after being found in possession of an illegal firearm at a roadblock just outside Senekal, police minister Bheki Cele confirmed.

He said police had started setting up roadblocks leading to the farming town on Thursday in anticipation of crowds attending the bail hearing of Mahlamba and Matlaletsa.

Cele said several people carrying firearms had been asked to turn about.

He said a video of a trunkful of firearms which trended on social media had not been established as authentic by the police.

“All relevant and capable structures here have not established that.”

The bail application was postponed to Tuesday. —

21-year-old Brendin Horner was found brutally killed near Paul Roux in the Free State on October 2 2020. While two suspects have been arrested in connection with the killing, investigations are ongoing. MultimediaLIVE takes a closer look at the young farmer's death which has caused chasms in the local community.

The EFF is not going to Senekal for war but if the trip to the Free State town results in one then “so be it”, party leader Julius Malema has said.
News
1 year ago

Free State police announced on Friday that the N5 road running through Senekal has been temporarily closed.
News
1 year ago

One person has been arrested after being found in possession of an illegal firearm at a roadblock just outside Senekal in the Free State on Friday ...
News
1 year ago
Next Article