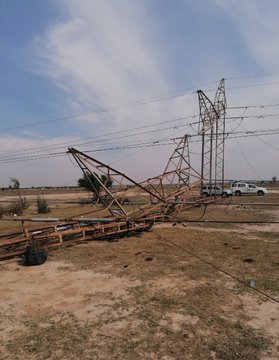 Parts of Welkom will be without electricity for an extended period, after Eskom towers collapsed during storms at the weekend.
Image: Eskom

Storms in the Goldfields area of the Free State have led to the collapse of two 132 kV towers on the Everest-Welkom Bulk feeder.

This resulted in a loss of supply to a substantial portion of Welkom since 8pm on Sunday.

"Due to the extent of the damage, it is expected that the outage will last for an extended period," Eskom said in a statement.

An update will be provided later on Monday once an estimated restoration time has been established.

Two people have died in a space of less than two weeks due to illegal electricity connections in Johannesburg.
News
1 year ago
Next Article