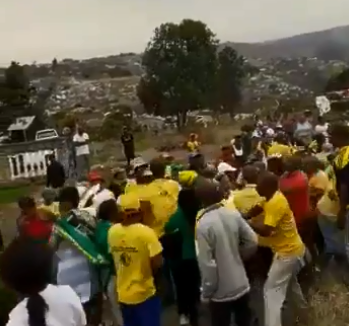 A fight broke out between ANC members in Umlazi on Saturday over the nomination of a ward councillor ahead of an upcoming by-election.
Image: Zimasa Matiwane

A fight broke out between ANC members in Umlazi south of Durban on Saturday over the nomination of a ward councillor ahead of an upcoming by-election.

Branch members of ward 84 were meant to hold a meeting at which they would come up with a nomination for a councillor.

The nomination, which is conducted via voting, was meant to be finalised and sent to the eThekwini region, and then to the provincial executive committee to be finalised by the national ANC leadership.

The council seat became available after the death of Bhekithemba Phungula, who also chaired the local ANC branch.

ANC warring factions in ward 84 Umlazi met to nominate a ward councillor ahead of by-elections.
However the meeting descended into a brawl @TimesLIVE pic.twitter.com/gyga571AjL

Phungula was killed in a hail of bullets by unknown assailants at his Umlazi home.

The by-election is scheduled to take place on November 11.

Deputy convener of the eThekwini regional task team (RTT) Bheki Ntuli said he was in the process of establishing the facts regarding the brawl.

WATCH: When politicians use fists to solve problems

When the topic gets heated, politicians get physical President Jacob Zuma recently called the behaviour of MPs in Parliament an embarrassment and ...
News
5 years ago
Next Article