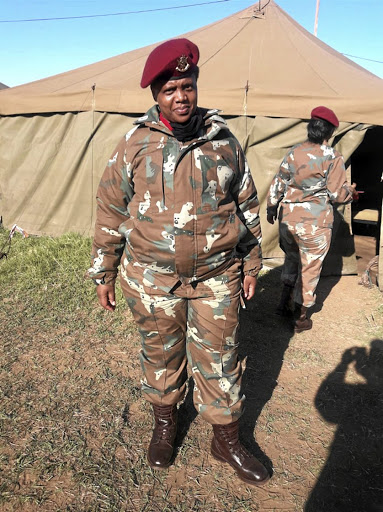 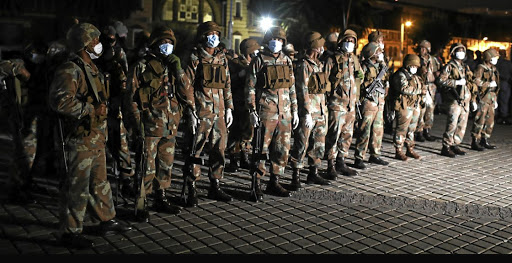 Two soldiers who were deployed as part of the military medical group to help combat the coronavirus pandemic have laid bare alleged ill -treatment at the hands of their camp commander.

The reservist soldiers were allegedly refused Covid-19 testing and quarantine last month after a colleague they worked closely with at a KwaZulu-Natal camp tested positive.

And when they insisted that regulations dictate that they be quarantined, their call-up was cut short and they were told to leave the camp by their decorated South African National Defence Force (SANDF) commander - Lieut-Col AB Mlambo.

Two of the reservists who have since tested positive told Sowetan how they were sent home in the middle of the pandemic and risked infecting other people when they travelled by bus from Kwazulu-Natal to their homes in Johannesburg and Free State.

The soldiers were part of the more than 70,000 deployed by President Cyril Ramaphosa in May when the number of positive cases started to climb exponentially.

Those who raised concerns about the risk of potentially being exposed to Covid-19 were also allegedly kicked out of the 1 Battalion Medical Group and forced to take public transport home.

One of the soldiers, Lieut-Col Babalwa Dada - who later tested positive after arriving in Johannesburg - said that their call-up to KwaZulu-Natal was abruptly terminated a week earlier as their commander allegedly said he would not quarantine all of them.

This is contained in a grievance letter that she lodged with the military following her ordeal.

In it, Dada explained how base commander Mlambo, who is also the chief of staff, told them that they cannot all quarantine and that those who were not from KwaZulu-Natal must "pack up and go".

The coronavirus “is relentlessly taking the lives" of people in the province, premier Oscar Mabuyane said on Tuesday.
News
1 year ago

"He emphasised that people from outside KZN must start to travel from Wednesday 24th of June 2020 to their respective provinces as it is the end of our call-up, without testing," Dada said in the letter.

"I personally asked him what if we are infected. He said there is no way that we can be infected, all of us.

"His exact words: 'we will cross that bridge when we get there'."

The supposed bridge was to be crossed after they had all returned to their homes.

Her colleague, who opted to remain anonymous but has also tested positive, said that the base commander refused to allow them to go get tested and used his own criteria to decide that only nine of the 32 personnel in the camp must be quarantined.

"We were scheduled to leave the following week and in a panic we asked, 'but commander, don't you think it is advisable to quarantine the whole camp?' He said he would not do such a thing because there is no way 32 people could have had contact with the person who tested positive," the colleague said.

According to Dada, they all went to get tested, against their commander's wishes, but were told to immediately vacate the base while they awaited their results.

The defence force has deployed 52 health care workers to the Eastern Cape.
News
1 year ago

She said while still awaiting her results she was forced to use public transport to get home to Johannesburg, risking people's lives in the process.

"How do you release a person [exposed to the virus] to travel from one province to the other? You tell them that they must go between these two provinces. That is attempted murder," Dada said.

Sowetan has seen WhatsApp exchanges between Dada and Mlambo, where he continuously ignored her, even when she informed him of her positive results.

She was later kicked out of their work WhatsApp group where she had raised her concern.

In a voice note sent, Mlambo told the remaining officers that he made it "very clear that this group belongs to me" and that Dada was ill-disciplined to have raised her concerns in the WhatsApp group.

"So this group is not to attack anyone. It's not for attacking each other, let alone to attack me. This is a sign of ill-discipline at the first place."

The SANDF said it was investigating the incident to establish the facts and what could have led to the situation with their members.

"Commanders at all levels have been given guidelines on how to manage Covid-19 cases within the South African National Defence Force. This includes quarantine and isolation facilities for SANDF members where a member does not have enough space to quarantine or isolate at home," senior staff officer on communications Jaco Theunissen said yesterday.

Theunissen said the army had to put in place measures to curb the spread of Covid-19, including regular decontamination, screening, compulsory wearing of masks and adherence to basic personal hygiene.

‘It’s as if floodgates have opened’ since level 4 was announced: KZN premier

KwaZulu-Natal premier Sihle Zikalala has lamented that his province’s people have seemingly not adhered to level 4 lockdown regulations.
News
2 years ago

Soldiers will now move beyond just enforcing the lockdown regulations on the streets with the additional personnel set to screen people on ...
News
2 years ago

Neighbours of the Khosa family said they had seen soldiers assaulting Collins Khosa and his brother-in-law at their Alexandra home as new details of ...
News
1 year ago
Next Article