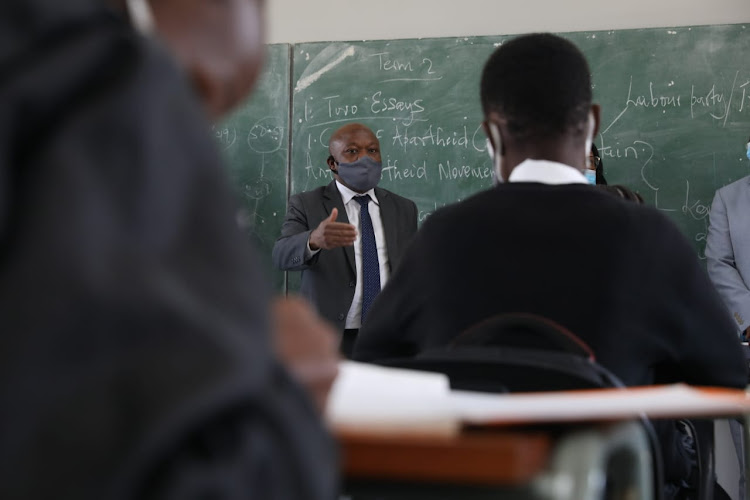 At least 46 schools are yet to open in KwaZulu-Natal, while two others have been closed just a day after reopening due to teachers testing positive for Covid-19.

This was revealed by premier Sihle Zikalala on the sidelines of a visit to Ohlange High School in Inanda, Durban, on Tuesday.

“On the first day [Monday], eight districts opened without any challenge. By Sunday we said we were ready, with the exception of 104 schools. That number has since been reduced to 46, more schools have since opened than we anticipated,” he said.

While two of these schools are in eThekwini, Zikalala said most of them are in rural districts such as uMkhanyakude, Zululand and uThukela.

He said all schools, including those yet to open, have enough personal protective equipment (PPE) and other essentials needed by teachers and pupils.

“We are mindful that districts have schools that have not opened. The 46 schools are affected by lack of water provision and ablution services,” he said.

Zikalala said the department of water & sanitation and the SANDF were working together towards providing water and toilets to the schools that are yet to open.

Two Durban high schools were forced to close on Tuesday after a teacher at each school tested positive for Covid-19.

Matric pupils at Clairwood Secondary and Apollo Secondary, both situated south of Durban, were cautioned to remain at home just one day after school resumed on Monday.

“We have closed those schools for three to four days to check all teachers and pupils, and disinfect the schools.”

The premier thanked teachers for their dedication to following precautionary measures and working together with health practitioners to ensure that “problems are actively avoided”.

104 KZN schools not ready to reopen

At least 104 schools in KZN will take a delayed approach to reopening as they're not ready.
News
1 year ago

'No more room to keep social distancing at schools'

There will be no space for social distancing in class in some schools when the next batch of pupils are expected back at school next month.
News
1 year ago
Next Article